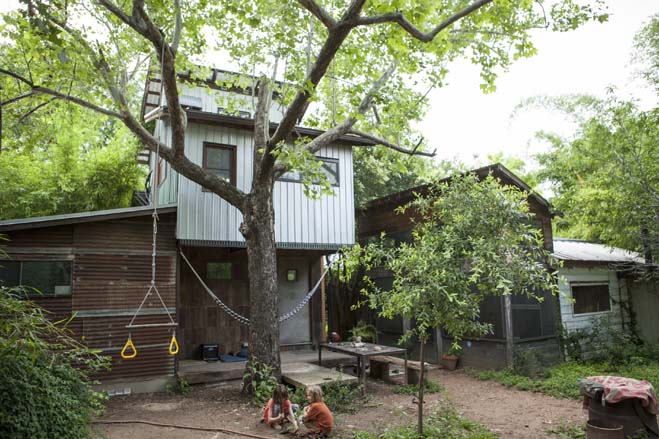 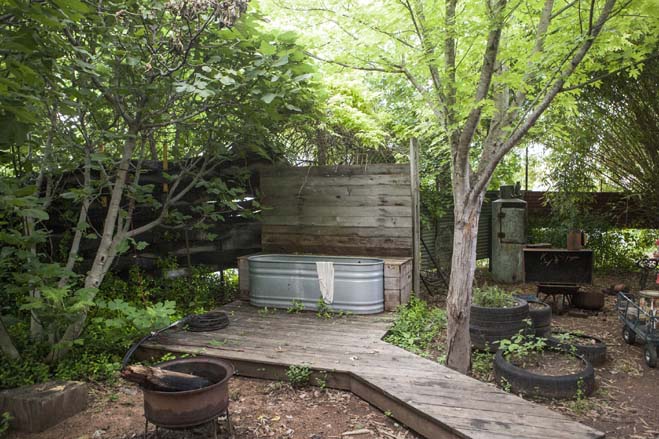 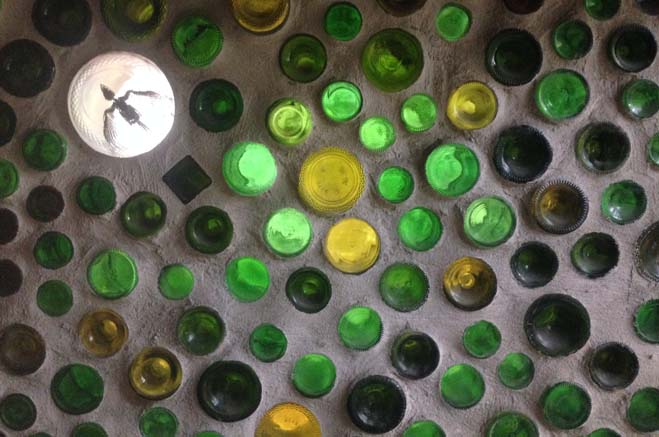 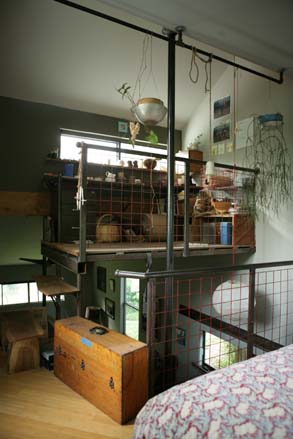 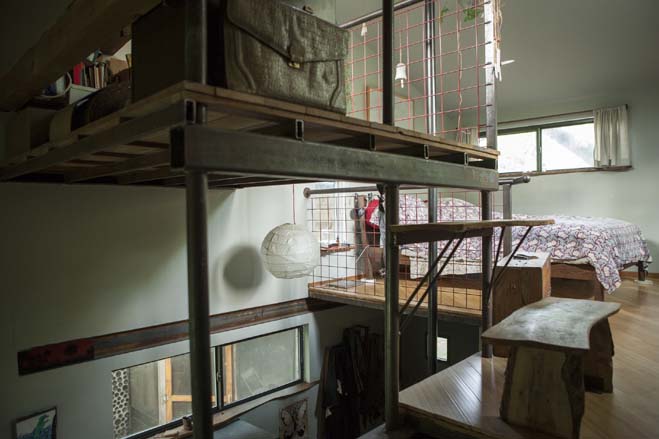 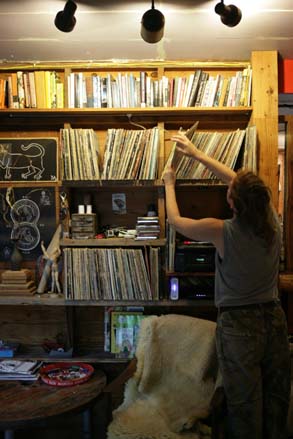 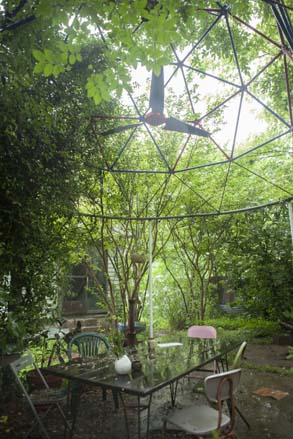 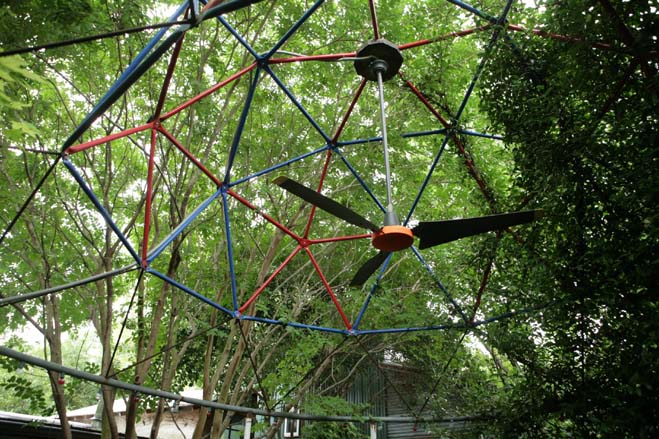 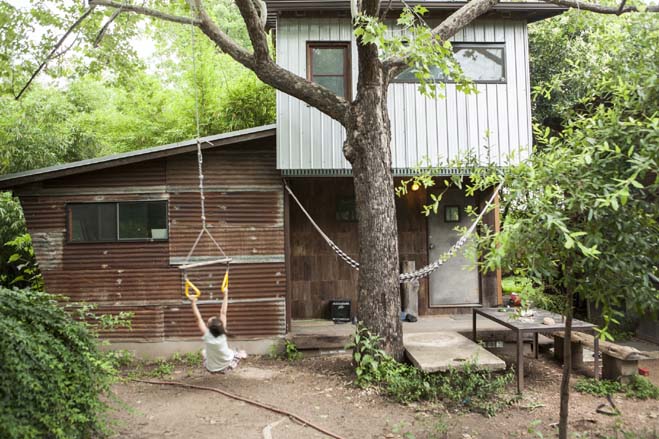 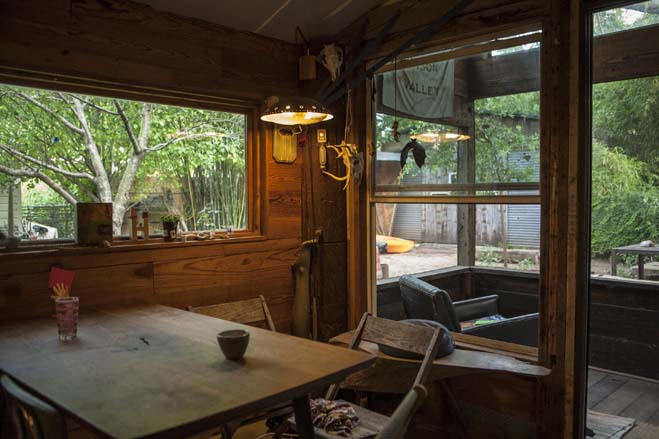 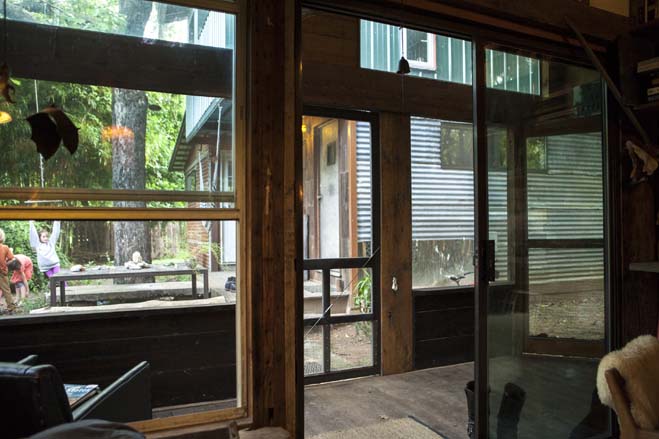 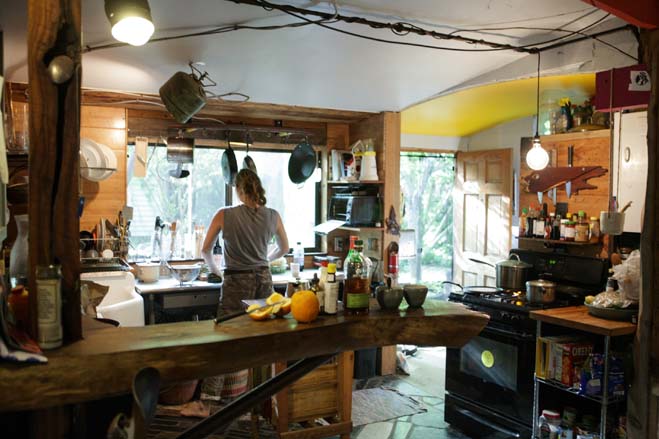 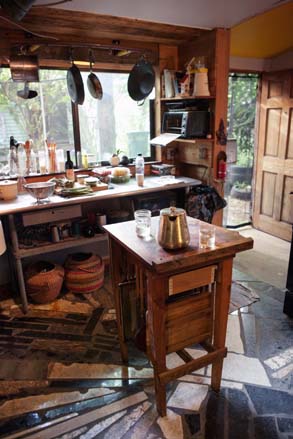 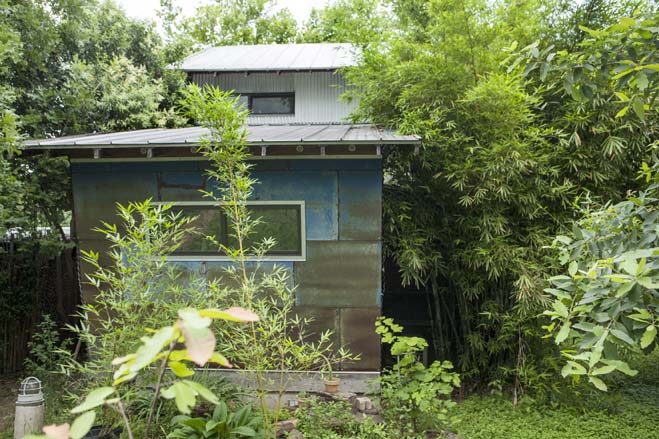 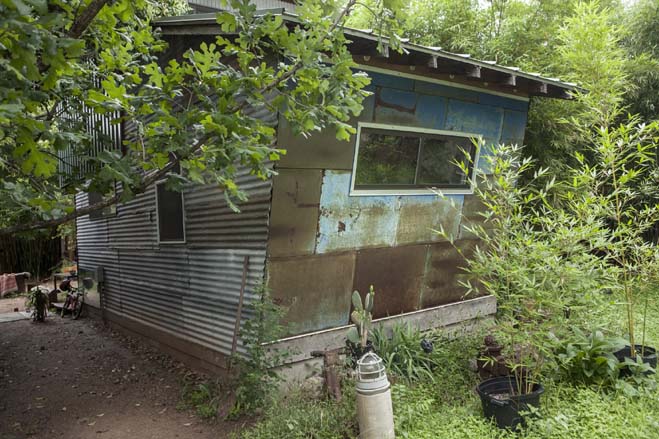 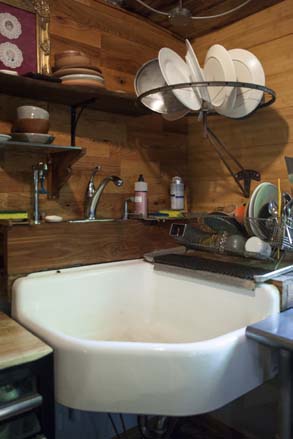 Improvement Center:   What was the main goal of your design?

Diana Welch and Jesse Hartman built their one-of-a-kind home out of mostly reclaimed materials sourced within a dozen miles of their Austin, Texas dwelling. The project was a labor of love, and an opportunity for Jesse to hone his skills as a designer and builder. He now runs his own industrial reclamation company, Shift Build.

Diana Welch: When Jesse and I bought this place, it was just a simple house with a laundry shed in back. To help pay the bills, we rented the front house out to our friends ... and moved into the laundry shed, which is now our kitchen and dining space. First we ripped out a wall to get some light in the space, and literally slept under a tarp because the roof had a leak. Our renovation and design developed from there - there was a sense of urgency, because we needed to build everything (a bathroom, for instance) but it was also a slow moving, organic process because we were so broke.

IC: How would you describe your style?

DW: Jesse and I share a similar aesthetic - not a lot of clutter, but we aren't afraid of textures. If I had to sum it up, I'd say our home's style is warm, eclectic, and simple.

IC: What’s your best advice for homeowners undertaking their own home design/renovation?

DW: Don't be afraid to try and do it yourself! Some of the most fun we had was dumpster diving the stone scraps for our kitchen floor. It is so rewarding to roll up your sleeves and dig in.

IC: Which home features are most important to you and why?

DW: I really like things to be cohesive and comfortable. In other words, I like to be able to sit anywhere in the room and be able to look around and feel content. Jesse and I also love nurturing an indoor-outdoor feeling. For us, it's all about windows for me. And: No curtains! Let the light in! When I'm inside, I want to see leaves and sky.

IC: What was the biggest challenge you faced?

Because we did everything ourselves, there were some moments where we disagreed on what step to take. It was hard on both of us, because we are both very particular. But, Jesse really did the bulk of the heavy lifting, literally, so when it we came to an impasse, I would cede to him.... sometimes.

IC: What was your favorite part of the project?

DW: This is a tough one. I loved making the bottle wall in our bathroom. From cutting the bottles to mixing the cement, it was really so satisfying. I also loved choosing paint colors - I never knew there were so many shades of grey.

IC: Anything you’d do differently if you could do it all again?

DW: Honestly, this home is so personal, I wouldn't do anything differently. Jesse says that he'd do a lot differently - because this was one of his first projects, he was learning as he went. A decade has passed since we started this project, and in those ten years he has gained such a wealth of experience. It has been really wonderful to see him grow as an artist and businessperson.

IC: What took the most time to finish?

DW: Our bedroom building is the only space that was designed and built from scratch, so that took the longest from soup to nuts. And, if we're being honest, it's still not finished - Jesse had some grand plans of a double-decker built-in bench situation on the tilted wall, but I don't think that will ever come to fruition.

IC: Did you use a contractor or undertake the project alone? Why?

DW: We did it all ourselves! Of course, it would be unfair of me to not share that Jesse is a genius designer who specializes in gorgeous, affordable homes for people. But, we did hire out the spray foam insulation that keeps our bedroom building cool in the summer and warm in the winter. That was a splurge, and it was worth it.

IC: How did you decide where to splurge and where to save?

DW: We splurged on things that would make our home efficient - the insulation, like I mentioned, was something that we opted to hire out.  And also things like the instant water heater - we decided to shell out for a Tegaki instead of those more affordable behemoths of yesteryear, and I don't regret it for a minute.