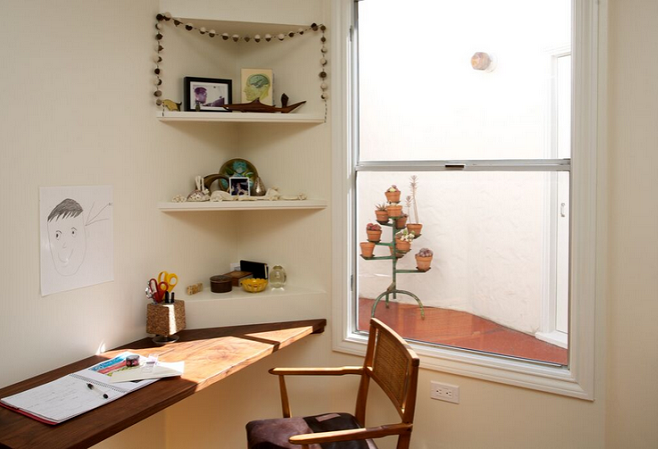 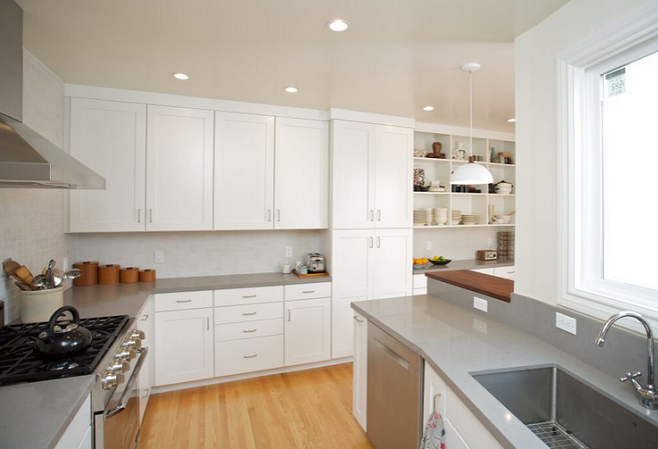 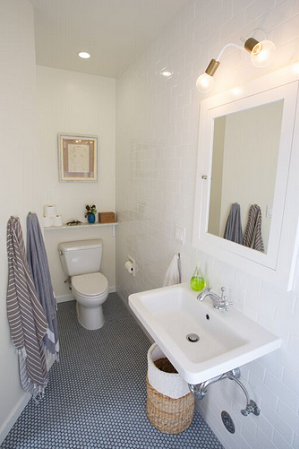 Improvement Center: How did you find your contractor?

Michaela Calanchini Carter: We figured out our total budget first and then calculated approximately how much everything would cost that we needed to pay for in the way of materials and appliances, and then figured out how much of our budget we had left to spend on the contractor. We got bids from three contractors and we went with one – Kent –who had done an extensive add-on to my friend’s house, so I had a chance to see his work and I met with my friend and asked her tons of questions.

MCC: This room used to be a breakfast nook, but I had been using it as an office. There was an ill-fitting table as a desk, and just a lot of wasted space. We opened the wall and installed a breakfast bar between the kitchen and office. My friend made the breakfast bar out of dark walnut and a desk top to match that’s mounted to the wall. It’s a very small office space so I have to keep things tidy but I like it that way because it doesn’t get overwhelmed with junk. The triangular corner shelves are the one thing that’s original to the room.  We decided to leave them because they mirror the angle of the atrium wall near the breakfast bar. I like the function of it, and I can use it to display my curios.

MCC: I was dead set on having that. I just knew if I could fill the wall behind the stove with Heath tiles, I thought that was like winning the lottery. I knew I was going to cut corners in other places so I could splurge on the Heath tile. And then I ended up getting them for such a steal!

MCC: The bathroom was actually the room that we needed to remodel because it was molding and rotting and had a lot of issues that needed to be addressed.  Having young kids we decided to keep the bath and make a combo bath/shower and put a toilet in that space where the stall shower had been. Having a family of four, an extra toilet always come in handy!

MCC: What I learned through the process is to spend money on things that are more permanent and are the biggest materials in the room, like the cabinets, the countertops, backsplash, the things that are going to stay longer and be much harder to replace.

MCC: Trust your instincts. If you know you really love wood cabinets and granite countertops just Google those things and stick with what your gut instinct tells you and don’t get side tracked by all the other pretty shiny things because it’s really easy to.

Also, I wish I had done a wall mount faucet in the kitchen. It’s really hard to clean behind the faucet. Other than that I feel super proud of the way it turned out, and for never having done anything like this before we did a really great job!