Plumbing parts: How long before they need replacing?

Calling the plumber is one of a homeowner's most unpleasant experiences, but alas, occasionally it comes to pass. Plumbing wears out.

While many factors affect longevity, such as quality of materials, installation, and environmental conditions, there are some round numbers that you can use to judge a lifespan. Here is a look at some of the major components of your plumbing system. 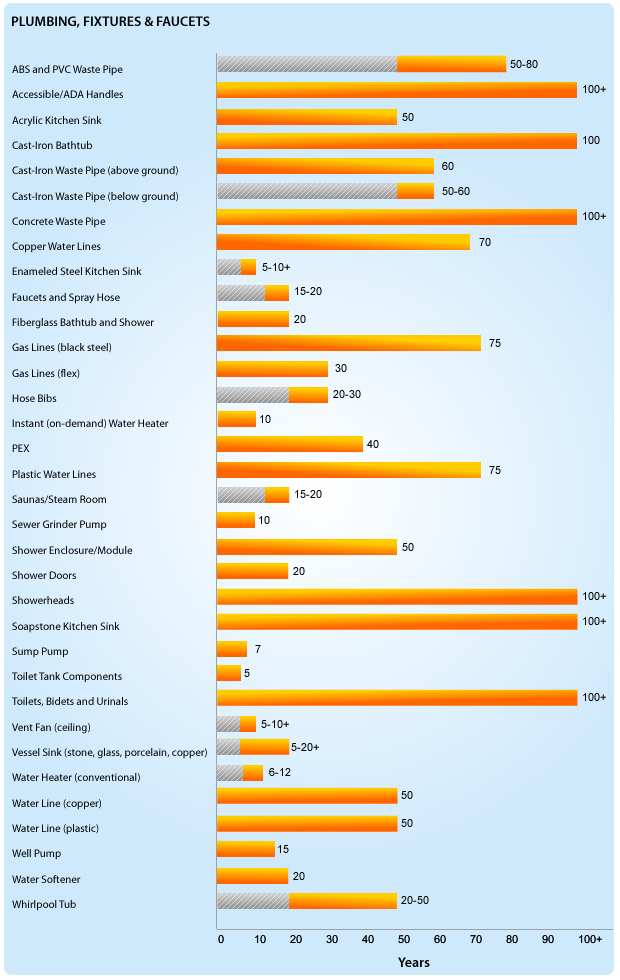 You might find any of these three types of water-supply pipes in homes: galvanized steel, plastic and copper.

You will find three types of waste pipe in homes: cast iron, concrete/clay and plastic (ABS or PVC).

A toilet can last a long time -- both NACHI and NAHB give it 100 years, unless it suffers some external abuse, such as a sledgehammer. Of course, that is referring to the porcelain part; the internal workings -- the lever, flapper and valve -- may have to be replaced every few years. If the water supply is very hard, the holes under the rim of the toilet from which water flows into the bowl can plug after several years and need a tedious and time-consuming cleaning.

Both organizations give faucets a lifespan of 15 to 20 years, but of course their lifespan is very dependant on the usage and quality of materials. Cheaper faucets may be plastic; the plating may be cheap or high quality. Often, a faucet will lose its plating and while the water control works well, it becomes unsightly.

The important thing to remember on any of the lifespans is that they are truly variable, depending on conditions and the original quality of the product. Just because one element has a life expectancy of 20 years doesn't mean it won't fail after half of that, or live twice as long.