Most DIYers can handle basic plumbing tasks, as long as they have cleared up any questions on code. Sometimes, though, poor decision-making not lack of know-how gets in the way.

Tim Elder, an inspector for Snohomish County, north of Seattle, Washington, recalls the DIYer who was working with black plastic (ABS) drain pipe.

"ABS joints are easily glued with an inexpensive cement, but this homeowner had dispensed with the glue and simply wrapped each joint with duct tape," Elder recalls. "(The homeowner) said he figured he would just undo the tape and glue the joints if we caught him."

Fortunately, he was caught, glue was used, and his drain didn't weep and seep whatever effluent it carried.

Don't get caught making these eight common DIY plumbing "corrections," which often wind up as mistakes:

1. Downhill. How water runs is just as important as the direction in which it runs-otherwise, it may plug. The slope for drains needs be only 1/4 inch per foot, or one inch for every four feet. Changes in slope beyond that should be made with 45- or 90-degree fittings, not by bending the pipe. 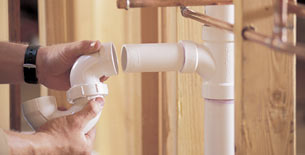 2. Caution, wide turns. Use wide-radius elbows for drains to keep the flow of water at a consistent speed. Do not use the sharp, 90-degree vent elbow designed for venting above the water line. Note: You may have vent piping, but you still cannot use the tight 90-degree elbow -- sometimes called a "vent elbow" -- if the joint is below the water level, which is usually at the level of the sink.

3. Wye not. Connections to horizontal drain lines should be made with wye (Y) fittings. The fitting called a "Sanitary Tee" looks like it could do the job, but it doesn't. A sanitary tee cannot be laid on its back, horizontally: It is shaped differently than the wye and should only be aligned vertically, or it may block up.

5. Well grounded. Plumbing that rests on the ground -- in a trench or under a concrete slab -- should be on a firm base. The drain pipes should not flex or have soft spots, if the inspector walks on them.

6. Solid support. Drains should be strapped, or supported, every four feet at the up-side of fittings and branch connections. The support is usually in the form of a metal strap that loops around the pipe and is nailed or screwed to a framing member, such as a joist or stud.

7. Nail protection. Protective nail plates and stud guards should be used anywhere that pipes are within an inch of the edge of a stud. The protection should extend 1.5 inches beyond the diameter of the pipe.

8. It's a gas. Venting pipes that stick out of the roof must be 10 feet from, or three feet above, a window or air intake, including skylights that open. Otherwise, objectionable and toxic sewer gases could encroach upon your home, causing your guests to flee what they believe is a dangerously flatulent host.

"Plumbing isn't that difficult," a do-it-yourselfer once said. "Water runs downhill, unless it's under pressure, in which case it goes everywhere." And while soldering copper pipes or gluing plastic can be easy, the catch to plumbing is in the details. A plumber gets paid the big bucks because he knows the plumbing code and is supposed to get things right the first time. If you're restoring an old home, also check out the useful articles in Old House Web's Restoration Guide: Introduction to Heating and Plubming.

Despite some simple aspects, proper plumbing can be daunting for the DIYer, so if you must plumb the depths of your home's pipes, be sure to inspect this list of eight things the plumbing inspector will look for when giving your pipes to the "Go to flow." Or save yourself the hassle and contact a local certified plumber.