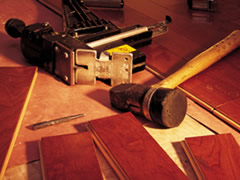 Subfloors are not glamorous. They are like football's interior linemen who open huge holes for the star running back--until you get a bad one, you don't appreciate their value. Sub-par subfloors can lead to squeaks and creaks, bouncy spots, cracks in your hardwood flooring and failed tiles.

The subfloor covers the joists. It is a structural component that adds strength and stiffness to your floors. Subfloors are not the same as underlayment, which is a covering that goes over the subfloor before the flooring material is applied. Underlayment adds very little or no strength at all to the structure.

Plywood subflooring usually is CDX, tongue and groove (T&G). The C and D refer to the quality of the two sides, and "X" means it is rated for exterior use (water resistant). The biggest problem with water comes during construction, when the plywood is rained on before the roof is up. Sheets are usually ¾-inch thick, though some jurisdictions may allow 5/8-inch (assuming 16-inch joist spacing).

OSB is made of shreds, or strands, of wood, mixed with wax and glue and pressed under heat. It is not the same as particle board or medium-density fiberboard (MDF), which are not suitable for structural uses. Only ¾-inch OSB or larger is used for subfloors, not 5/8-inch.

Depending on region, plywood is roughly $25 to $30 a sheet. Usually, OSB will cost $5 to $10 less than ¾-inch plywood. The biggest advantage of OSB is cost. There are some "super" OSB products designed specifically for subfloors, such as Advantech that cost a dollar or two more per sheet than CDX plywood.

Durability of plywood vs. OSB

Plywood is considered more reliable than OSB where the effects of moisture are concerned. It can be used with any type of flooring. However, it can have soft spots from gaps in the veneer and can delaminate when wet. If plywood has not been stored properly, it can sag or warp, and it becomes difficult to get the tongue into the groove during installation.

OSB is easier to work with because it won't warp and is considered comparable to plywood in strength. On the negative side, the edges of OSB will permanently swell if exposed to water, but manufacturers claim they have conquered the moisture problems of OSB with the more expensive "super" products mentioned above. Other concerns with OSB are that it flexes a little more than plywood, and it does not hold fasteners--especially nails--as well as plywood. OSB is not recommended for use under ceramic tile because of swelling and movement.

Plywood sheets are glued to the joists with a generous bead of subfloor adhesive and screwed down with 2½-inch subfloor screws. OSB application requires the same screw-and-glue process as plywood. Unlike plywood, a 1/8-inch gap should be left on all edges to allow for expansion.

If you are looking for a remodeling contractor to frame your new addition and construct your subfloors, you can start by filling out the form on this page. Remember, your floor is only as good as the subfloor, so don't cut corners on this critical element of your project--unless you have a round house.

Get a Free Flooring Estimate