There is a major shift in technology that is coming faster than a Model T about to run over a horse and buggy. The electric car that can drive itself is not science fiction. Imagine yourself on the streets of Detroit in 1908. There are no paved roads and virtually everyone is riding a horse or walking. That same year the first Ford Model T rolled off the assembly line. Just five years earlier, a British Member of Parliament said, "I do not believe the introduction of motor cars will ever affect the riding of horses."

Yet by 1916 Ford had sold 2.5 million cars. By 1920 the newly paved streets of Detroit were congested with car traffic and horses were nowhere to be found. Tony Seba, in his book Clean Disruption wisely notes that "the horse and carriage era didn't end because we ran out of horses. It ended because horse transportation was disrupted by a superior technology, the internal combustion engine." In the same way, gas powered engines are about to become obsolete because it's about to get smacked down by a superior technology.

It may be hard for many Americans to imagine the next reality-altering moment for transportation. Is your current internal combustion engine vehicle the really the last you'll ever own? Will the next car at your doorstep come from Apple, Google, Uber, Tesla, or Faraday Future (or another company from Silicon Valley rather than Detroit)? You bet. Even BMW has announced that virtually all of it's cars will be powered by electric motors within ten years.

In March 2016, Tesla will announce its next generation electric car, the Model 3. Currently, Tesla is known for its luxury Model S and soon-to-be released Model X. Even though these cars are a sedan (with optional seating for 7) and an SUV respectively, they rival the performance of $300,000 sports cars (the high-end Model S will go from 0 - 60 mph in an eyeball crushing 2.8 seconds, putting in league with cars like Lamborghini).

The Model 3 will be the first electric car for the masses. It will be priced on par with the average cost of an American car, around $35,000 without incentives (there's an additional $7,500 Federal Tax Credit for electric cars). Yet the true cost-of-ownership will be far less than a car in the same category.

Even with household spending on gasoline down this year, it still costs an average of $125 per month per car for fuel. Assuming gas prices don't go up (and don't kid yourself, they will), over five years you'll spend $7,500. Add that to the tax incentive for an EV and you're already at a $15,000 price advantage for an electric car.

The marginal cost to operate an electric car is almost zero, especially if you have solar panels that give you free fuel. This doesn't even take into account the much lower maintenance costs. Electric cars have fewer parts and don't ever need an oil change. The only fluid you'll need to replace is for the windshield wiper. 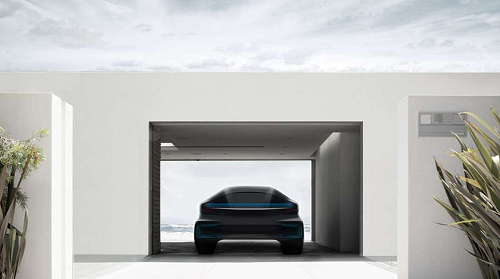 To make things even more exciting, a mysterious new start-up in California called Faraday Future is promising a list of things that their car will have in common with automobiles of today: four wheels. They say everything else about the car will be different and they compare today's cars to what life was like before the Internet. Faraday has swiped executives, engineers, and designers from Apple, Boeing, Lamborghini, Tesla, and BMW. They promise this all-electric car will be "personalized in ways you've never even considered possible." The company says they will reveal this next generation mode of transportation in 2017. It'll be exciting to watch.

Oh yes. And there may be one more thing that will be disrupted by electric vehicles that will always leave home with a full tank. Since you'll no longer need to stop for gas, you'll need to find someplace else to get your Slurpee and beef jerky.