Last week I wrote about our new wood burning stove. I rushed things up a bit so I could enjoy a fire while watching Boardwalk Empire. That Jimmy Darmody is a stone cold fox!

Today we’ll talk value prop, and I’ll compare the two most popular types of wood burning stoves. I’m going to phrase this in Q/A format since these are some of the questions I’ve asked over the past year while stove shopping, and because I’m feeling lazy and this will eliminate the need for segues.

Q. What’s the difference between a cast iron stove and a steel stove?

A. Both cast iron and steel stoves are made of the same element: iron. One is melted and molded, the other is an iron alloy. Since they’re made of the same stuff, performance is very similar, so the main differences are cost and aesthetics.

Steel stoves are made from pressed steel that’s welded together. They typically have cleaner, smoother lines. They’re basic, unadorned. They fire up a bit faster than cast iron, and heat a room quicker. They’re pretty much always black and are the less expensive option. 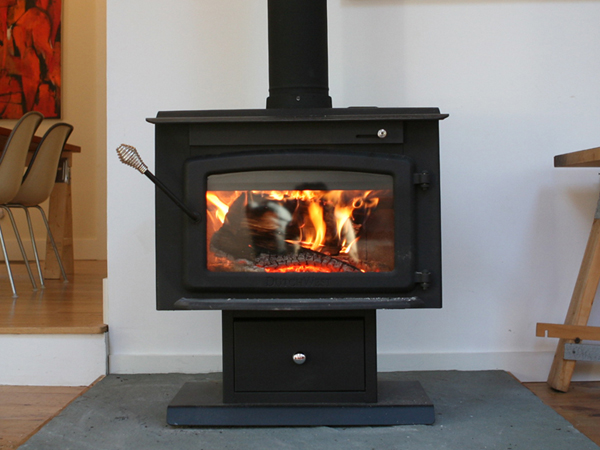 Cast iron stoves are made by pouring molten metal into molds. They often feature fancy moldings, flutes or other bling (e.g. the mountain ridge motif below). They can be coated in enamel, so come in various colors. They take a little longer to heat up, and typically have more parts -- bolts, caulking, etc. -- so are more likely to need eventual repair. They’re also about 20-35% more expensive than steel stoves (that’s just a ballpark figure based on my shopping experience).

Q. Will a wood burning stove save me money on oil or gas?

A. That’s the idea. Let's say you live in Columbia County, NY and you’re heating a 2,000 sq foot house with oil. That might cost $3,000 for the winter, maybe more. If you’re using propane, maybe that’s closer to $2,000 (that’s what we spent on propane last winter). If you relied only on wood, you’d pay around $220 a cord, which would likely last a month or more. That’s around $800 for the winter. Most likely you’d still use some oil or gas, unless you’re especially determined/hardy, but it’s reasonable to assume you could cut your costs in half, saving maybe $500-$1,500 a year, depending.

We bought our new stove from Amanda’s Fireplace in Hudson, NY. It was installed by a nice guy named John. While he was working I asked him to share a few tips and here’s what he had to say, verbatim:

1.      If you don’t clean your chimney you can burn your house down. Because of the creosote.

4.      For firewood, stay away from pine, it’s too sappy and creates a lot of creosote.

Thanks, John!  Here's another shot of our adorable old cast iron stove.

I would include a photo of our new steel stove in its surroundings, but as you may have noticed in previous shots (here and in the last post), it's surrounded by temporary tables made of saw horses and old doors (we're furnishing slowly) and clutter. My husband's office is not finished yet so his stuff is... everywhere.  The room above is my office, MINE, and so clutter-free -- the tidiest room in the house, always. And just look at that sweet little stove! Don't you want to give it a hug?

In my next post I’ll outline the differences between seasoned and unseasoned wood.