Bring on the snow, the sleet, and the freezing temperatures! We just had a Dutch West high efficiency wood stove installed, bringing our home's wood burning stove count to two. It's basic, made of pressed steel instead of cast iron, and sits on a square slab of slate. Clean, no frills.

The house had one stove when we bought it, a cutiepie Timberline cast iron stove. In a post I wrote last January about the insane cost of propane, I recounted wrapping up our holiday visit to Michigan early after a call from our contractor alerting us that our propane tanks were empty. Since the propane truck couldn't make it up our frozen road, we risked having burst pipes. I'm looking at "having burst pipes" and wondering how I could possibly phrase that better -- the possibility of? Threat of? -- whatever. We rushed home and saved our pipes. When we tallied our propane bills later, we discovered they averaged $500/month for the winter. Granted the house was under construction so heat was literally going out the window, but golly, $500 dollars a month! Since we weren't living in the house full time during construction, we couldn't rely on the wood stove for heating. We used it as much as possible on the weekends, if we hadn't our fuel bills would have easily approached $650/month.

We vowed to rely on our wood burning stove as much as possible this year, but knew even that wouldn’t be enough to eliminate the need for propane. Unfortunately, the existing cast iron stove is tucked away in the guest room/my office, which was likely the corner of a one room cabin originally. The location would have made sense in that scenario, but it doesn't put out enough heat to accommodate a now 2,000 square foot house.

Ergo, we decided to install a wood burning stove in the living room. One with a glass front for ambiance. 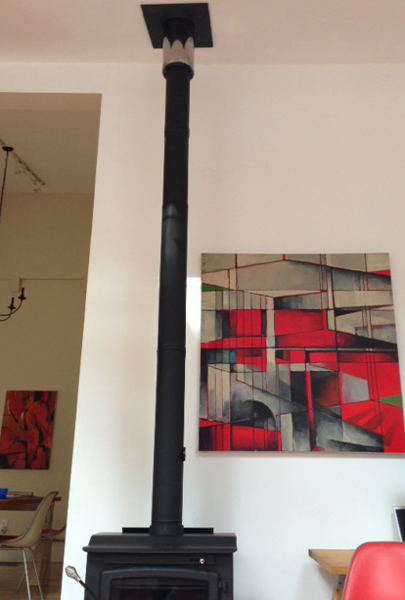 I was planning to write about the difference between cast iron stoves and steel stoves since we now have one of each, but I think that’s another post. Ditto for stove installation, and the not so obvious costs of installing a wood burning stove (e.g. in our case the piping was a significant chunk of the total cost since our ceilings are pretty high – see above).  For now, a few tips for selecting a wood burning stove, and using it properly:

#1 Get a stove built to accommodate the size of your house.

#2 Don’t let it get too hot; buy a thermometer. The temp should stay between 300-500 degrees, anything under will produce too much creosote (condensed flue gas), anything over and you’ll be warping your stove slowly (if you have a cast iron stove, the new steel stoves don't easily warp). You should also install a carbon monoxide detector.

#3 Have your stove cleaned at least once a year. At least. If you use more than a cord of wood annually it's a good idea to have it inspected twice.

#4 Use hard dry seasoned wood. This means wood that’s been sitting outside for maybe a year. Not sure if wood is seasoned? Read this post.

#5 don’t burn too much wood at once. Overloading can reduce the amount of air, which is necessary for combustion.

#6 Maintain proper airflow by regularly removing ashes from your stove, ideally you want about two inches of ash at the bottom of your stove.

There are other tips out there, but those are good starters if you’re contemplating a wood-burning stove for the first time. My husband's lighting a fire right now! He's also waiting on me to watch some Boardwalk Empire so gotta wrap this up...

I probably could have gotten some better shots from the doorway, but  I was too lazy to move that sheet of drywall.

Oh, and if you install a wood burning stove by the end of the year you can take advantage of a $300 Federal Tax Credit for improving your energy efficiency. Nice little incentive!