The month of bath and vanity flooring: Part 3, cutting the tile

Finally, after a couple of weeks of deliberation that took us into the middle of January, we -- or I should say, my BFF -- was able to start the actual work.

Here's a partial shopping list of what we needed for cutting and laying the tile:

BFF also used flat pieces of recycled cardboard boxes to cut templates of the most irregularly shaped pieces she had to fit around the bottoms of all the door frames. There are three doors in that small space: a pocket door between the master vanity and bathroom, a door between the bathroom and the adjoining hall vanity room, and one between the second vanity room and the hall. She was able to trace the shapes onto the tiles, which minimized cutting errors. 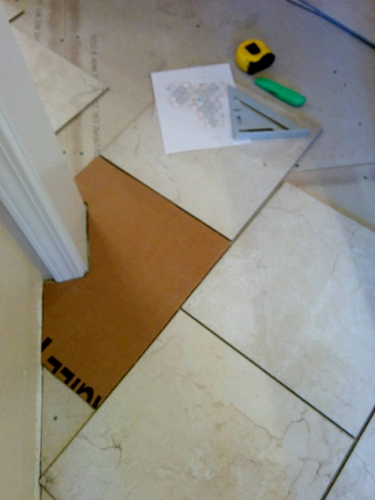 First BFF took out the too tall toilet, less than five years old and still nearly pristine by toilet standards. I'm donating it to Habitat for Humanity ReStore if they aren't overstocked on toilets. When you take out a toilet, remember that it drips. I scraped off the old wax ring on the floor and she plugged the drain with a rag.

Then the old sheet vinyl flooring in the bathroom had to be removed and the particle board beneath it. She also plucked out all the staples sticking out of the OSB to smooth and level the surface. 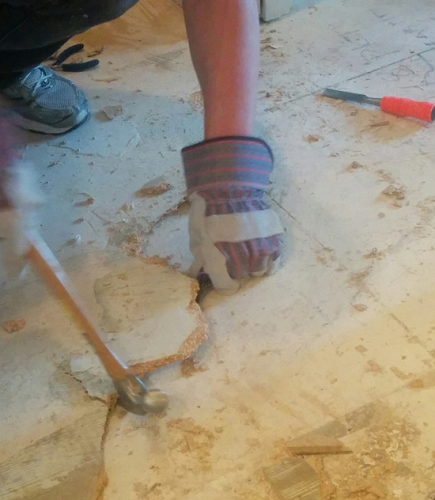 Next, she cut and screwed down the backer board. It's marked where to sink the screws, but BFF wanted to make sure she sunk some of the screws into the floor joists, so she wound up putting in more screws than called for. Drilling through the concrete board made a lot of noise and concrete dust. If you DIY this, wear a respirator and ear plugs. 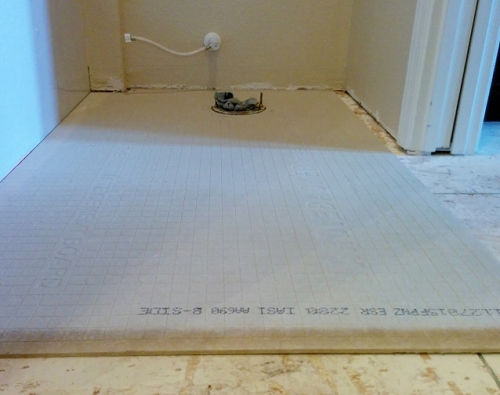 Cut to the chase

With the backer board finally installed, it was time to cut the tiles. The wet tile saw, despite the splash guard and "anti-splash technology" got BFF pretty soaked, and the only place to cut the tiles was the garage. The January weather did not cooperate. It was plenty chilly. We also didn't have a table on which to place the saw, so BFF had to crouch on the ground to cut each piece of tile. I didn't want to rush her, so it took more than a week to get all the tile cut.

While a lot of the cuts were just simple diagonals, quite a few pieces were nightmarish. She showed me how she had to make many small "relief" cuts to accommodate the limitations of the saw and chip away the tile until she achieved the right shape. After a couple of not-so-perfect cuts, she got the hang of it. I was amazed at how well she did with a saw that was really not the best one for the job, but the best I was able to afford. We both felt it was worth buying because we knew this would take a week or two given her availability, so renting would have been costly, too. 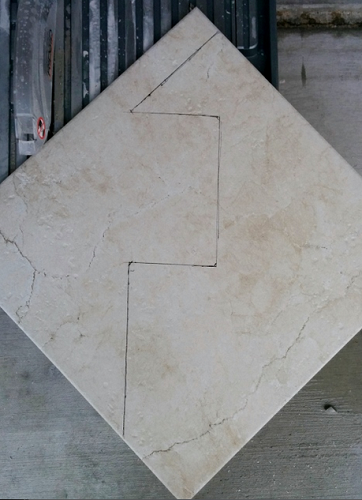 As she went along tile by tile, the floor began to take shape. She kept measuring, cutting and sticking to the floor plan, shifting the tiles a little and placing the spacers between them, making adjustments to the cuts as needed. It was a painstaking process, and she's even more of a perfectionist than I am…which is seriously hard to believe. 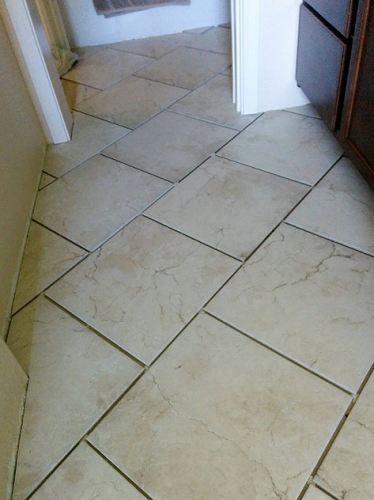 A tip about the spacers: They come with four prongs and instructions to stand them up between the tiles. BFF found that cutting off one prong to fit where the offset tiles intersected in a "T" kept the tiles from moving, much more effectively than standing the spacers perpendicular to the flat planes of the tiles.