The month of bath and vanity flooring: Part 2, planning the layout

Once I was convinced this was the tile I wanted, BFF began goading me to give her input on the tile layout. How hard could it be? They are squares. She has AutoCAD, a design software, and planned to use it to draw up a "floor" plan to work from.

But the obvious alignment side-by-side did not do justice to the tiles when we laid them out on the floor. It was blah, and if I'm spending money to upgrade, blah is never okay with me. Sometimes I have to settle, and I would have been willing to do that to spare BFF any unnecessary extra work, but she agreed that was not the way to go.

I looked at photo after photo in online galleries, and I Googled images of tile floors. For large square tiles I saw them squared up or laid on a diagonal. I saw designs where smaller tiles were placed at the corners and designs outlined with small mosaic tiles. I wasn't prepared to buy more tile for accents or make it that complicated for BFF to install.

I remembered her saying way back when tile flooring was still a hypothetical choice that she wouldn't want to lay tiles diagonally -- that it would be more difficult for her to work with -- but we were both looking for a way to make these tiles really stand out. We tried them diagonally, but the layout still left us as cold as the tiles under our feet on a January morning. She said they looked too '60s and not in any good retro sort of way. I agreed.

At that point we got sidetracked and began debating whether to heat the floor, but we still hadn't decided on the tile layout. We shelved the heated flooring discussion before it got too…heated. I coyly suggested offsetting the tiles ½ a tile, hoping she wouldn't clobber me with one of them -- not that BFF would do such a thing, but I was pretty sure the idea of staggering them would make her head spin. She tends toward more traditional designs. I was surprised she was willing to consider my suggestion. We both got excited when we arranged them on the floor and began to see something closer to what we both had in mind. 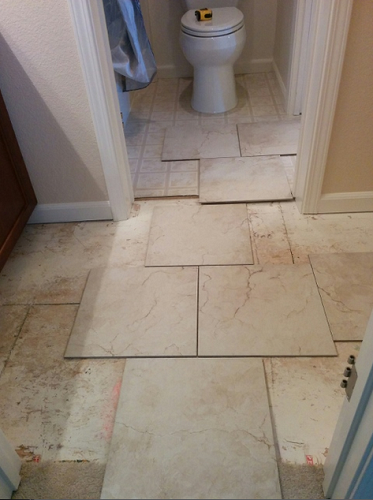 But a visual dilemma reared its ugly head. Because the two vanity areas are joined at right angles by the bathroom, whichever direction we chose to offset the tiles left a plain row that created a "runway" effect either to the bathtub from the master bedroom or straight to the toilet from the hall. One vanity room and the bathroom would look fabulous, but the other would look ridiculous. 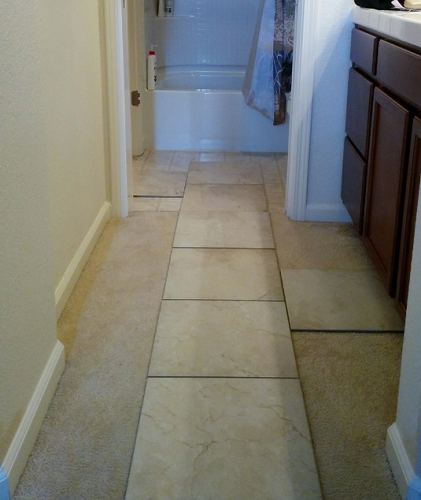 Maybe if the shower or toilet were showstoppers, things would be different, but they are extremely mundane -- nothing to which I wanted to draw the eye. The only way to offset the tiles to change direction in the bathroom and avoid the runway effect required cutting and installing a partial tile in the corner where the two vanity doorways met at right angles at the bathroom. It looked out of place, but because it wasn't a focal point, I thought that might work.

We were almost in agreement, but decided to sleep on it…the plan, not the floor. Then came the day we were going to make a final decision. There was a moment in which I hesitated, thinking for sure this time she actually might clobber me when I said, "What if we offset them and ran them diagonally?" We tried it, played with the diagonal one direction and then the other; discussed whether we wanted the diagonal to lead into the sink or into the opposite wall. We were talking as if this was a viable solution, and really, it turned out to be the only perfect solution to the runway dilemma. More than that, it made the tiles look elegant and not just "there."

I tried to dissuade BFF, afraid it would be too much work, but she agreed it was by far the best-looking design. She was on board. Here's the design she "cadded up" so that full tiles would land in the most pleasing array.

So in the end, we made an unspoken deal. I traded the heated floors for a more intricate tile layout. I can always wear slippers.