I never realized how beautiful light-framed construction could be, until I stood here: 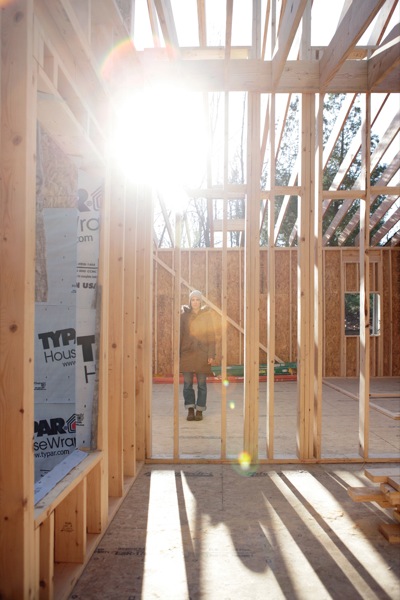 Studs and headers, stately, precise. Such graceful repetition, pure and mathematical. It really got my heart racing!

And now I want to build something. 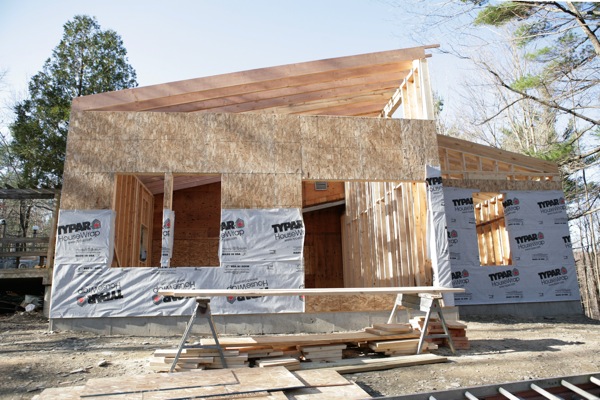 The room on the left is the master bedroom, on the right is the second bedroom. Below is the house two months ago, note the outline of the addition, marked "profile option 1":
We considered two different options for the addition, and ended up going with profile 1. This allows more natural light in the living room, and was less square footage, ergo less expensive. Our house will be 2,000 square feet when the addition is complete -- that feels like a decent amount of space for a family of four anticipating lots of house guests.

A few months ago we published an infographic on this site called "What home buyers want today." One statistic that caught my attention is the increasing square footage per person in the average American household. In 1950 the average square footage per person was 290. By 2010 that number had climbed to 924. That's a gain of 126 square feet (the size of a large bedroom) each decade.

Maybe I've been living in the city for too long, but almost 1,000 square feet per person strikes me as indulgent, and definitely not environmentally friendly. Even our 500 square feet per person is generous. I admit feeling some green guilt, but like I said, we'll be hosting friends and family. In fact, since we bought the house we've only only spent one weekend there without house guests. Even unfurnished our friends have been game. We've got the basics (air mattresses, bonfire pit, whiskey) so we've been snug and happy.

The sliding glass doors in the "then" photo will be reused in the master bedroom. They'll frame our little yoga area below. 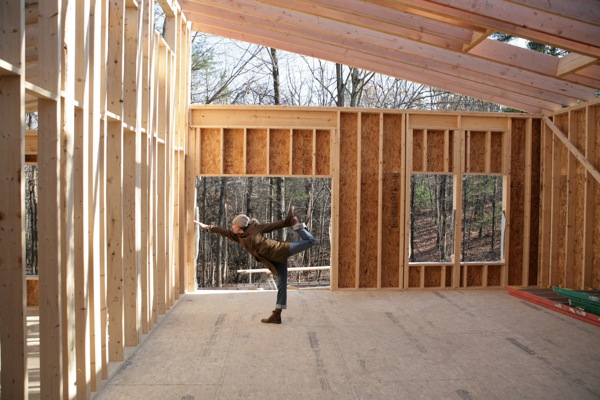 Standing bow pulling pose, one of my favorites.

The living room looks a little different without the sliding glass doors. 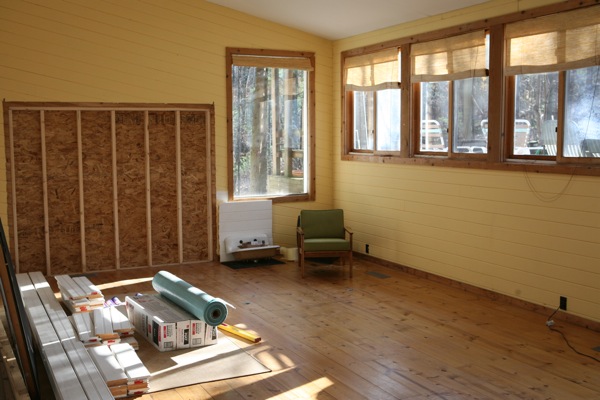 Last weekend our contractor came by to walk through the addition with us. He said that he'd been doing some of the building himself, which surprised us. We thought he was just managing the project, since that's what construction managers typically do. There are two reasons he's been more hands on with our house. 1. To keep costs down. 2. He wanted to build something. His most recent clients hired him for renovation work; he was itching to build.

I've been a fan of Kit Stansley, the DIY Diva, for years, and was thrilled when she agreed to contribute to this site. When I read posts like this one about the 900 sq. foot addition she built (by herself!) it all sounded so... tiring. Well, standing inside our framed out addition something clicked. I think I get it now, and I haven't even picked up a hammer.

My husband and I are planning to build a studio on the property in the next year, that could be my first attempt at building. Or maybe we'll practice with a chicken coop. I sure hope Santa brings me some power tools next month. Just in case he's reading this post, the Makita LCT300W 18-Volt Compact Lithium-Ion Cordless 3-Piece Combo Kit is on sale right now for $219 through Amazon. (1,280 inch-pounds of max torque, Santa!)