Before you get too deep into this article, I have a confession to make. What you are about to read is a topic way above my pay grade and intelligence. So, I can't really evaluate whether this is the coolest technology to hit the renewable energy industry, or this is a notch below the credibility of the Springfield Monorail on the Simpsons.

Solar panels are increasing in efficiency year after year. Over the past five years, the price of solar panels has declined by about 80 percent. But, some of the best panels on the market operate at about 20 - 22 percent efficiency. A slight nudge in the efficiency of solar panels would be a game changer.

One factor in panel efficiency is heat. As panels get hotter, they lose efficiency. For example, my panels in Ann Arbor on a cool spring day will produce more electricity than a comparable panel in Phoenix, Ariz. in the summer.

The V3 Solar cone claims to reduce the heat by spinning the panel. Sadly, there's no data to show that the cone is indeed cooler. While it makes sense that a spinning cone would dissipate heat, there are many factors that go into cooling and electricity production efficiency. 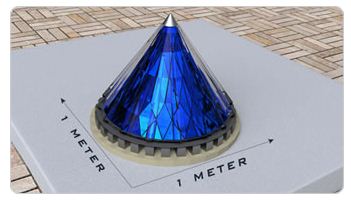 The company also claims some sort of magic flicker (resulting from the "Penumbra Effect", better know to sailors like me as the "green flash") that increases the total energy captured by the panel. Again, there is no data showing that the increased energy is more than enough to compensate for the fact that the cells are on the dark side of the cone 50 percent of the time when they capture no sunlight.

The good news for consumers is that, whether or not this magic solar cone works, solar is already cost-effective in the long term. As the up front price drops, solar becomes more affordable for everyone, and it's becoming easier to invest in profitable solar projects through opportunities like crowd-funding solar.

In January 2013, 100 percent of all new power generation in the U.S. came from renewable energy. As energy prices continue to rise, don't be surprised if you're shopping for solar panels in the next few years . . . whether or not they spin on a cone.