Seasoned vs. unseasoned firewood; a primer

Before I moved to the country, I mostly visited Youtube for novelty purposes. The only even remotely educational uses were directed at my kids: E.g. my youngest learned how to do the robot from James Brown Gives You Dancing Lessons and when she objected to brushing her teeth, a search on the keywords “Rotten Teeth” did the trick. (I’ll spare you the link, but for those those with children in need of motivation, search for a video called “The Good, The Bad, The Rotten”). My daughter's dental hygiene improved immediately.

Indeed, until recently, Youtube was that one site you visited to watch the new Justin Timberlake video, which inevitably led down a rabbit hole of music video consumption that more often than not ended with this psychedelic Earth Wind and Fire video.

And then I discovered that everything you really need to know can be learned on Youtube. Like, actual useful information.

My husband’s nightstand in the country is completely different than his city nightstand. In Brooklyn, it's holding the latest copy of New York Magazine, The Times and maybe a Murakami novel or an autobiography by someone artsy (e.g. Patti Smith or Keith Richards). Up here in the country, you’ll find Black & Decker's The Complete Guide to Decks along with a pile of user manuals for various powertools. He spent every night for a solid week poring over the manual for his new chainsaw.

But that's at night. During the day you’ll find him in front of his computer watching DIY videos on Youtube. Building a deck? Finishing newly installed skylights with drywall? Turning a closet into an office? Watch and learn.

In a previous post, I noted the importance of burning seasoned wood, but I didn’t understand how important it actually is until a few weeks ago when we had a truckload of supposedly seasoned but actually unseasoned wood dumped into our driveway.

Here is a picture of our firewood, stacked by me and my muscular husband.

You can't tell from this photo, but the wood in front is seasoned, the wood in the back is not. Once we learned that the seasoned wood that had been dumped in our driveway was actually unseasoned, we found another supplier and ordered a second cord of wood. So you're looking at two cords of oak. Here's a closeup of unseasoned wood: 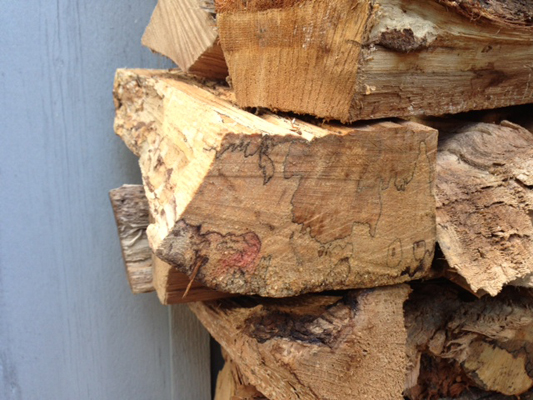 You can tell right away that it's green, full of moisture. It's heavier than seasoned wood, obviously.

And below is a photo of seasoned wood. 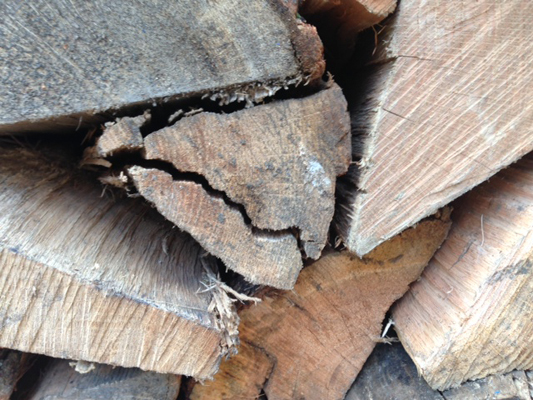 It's more ashen in color, there are telltale "checks" (cracks).

Some takeaways on seasoned vs. unseasoned firewood:

The wood in the photo above is seasoned. You can see that in some cases the bark is coming apart from the wood. That's another indicator that it's ready to be burned.