Purging the clutter: not magic, but just as amusing

I have this fantasy about my home from time to time. Maybe you have the same one about your house?

In my daydream I walk into a room, and it's clutter free, everything in its proper place. My fantasy home would be as neat and tidy as a spread in the latest Pottery Barn catalogue. Of course, no one lives in those staged rooms.

Regardless, I imagine clear surfaces, polished to a shine. Shoes, junk mail and coupons, sweaters and jackets in their designated places. Dishes and cookware wiped dry and put away instead of left to air dry. Unused, random stuff destined for donation in the trunk of the car, not in a box behind the bar.

You'd think in a one-person household, this would be easy enough to achieve. Not necessarily so…and despite my reputation as a perfectionist, I'm not there yet. Mind you, my home takes less than half an hour to tidy if someone calls to say they are stopping by, but I'm talking about a fantasy goal of the house looking like a freshly made up hotel suite 24/7.

That's probably not going to happen.

Even hotel rooms get messy as soon as you move in. Bedding gets undone, furniture gets moved around. Clothes blossom from suitcases.

"Moving in" and "mess" go hand-in-hand -- until you start putting things away as close to where you expect to use them as possible. If you unpacked your kitchen utensils into, for example, your bathroom vanity drawer, you might have a problem from the get-go, but if you put them in your kitchen where they belong, you probably started out with your home relatively organized.

Once you start living in the house, however, things get left all over or forgotten in the bottom of a drawer. What you don't use may get shoved to the back of the closets or the cabinets. When you're looking for something you need, you end up pulling all the unused stuff out in your frenzied search.

Maybe you stumble across a few boxes of miscellany you may have packed last minute during a previous move and that haven't been opened since. When you finally get around to peeking inside, you have no idea what to do with anything. You've lived without those things long enough that you don't really need them. You may not even want them.

There are all kinds of theories about clutter and why it accumulates. There is a ton of advice about purging and reorganizing. In the end, however, it boils down to being honest about which things mean something to you. Either you like them well enough to use/wear them -- even occasionally -- or they no longer amuse you. The junk mail, for example, may never amuse you unless you get a kick out of shredding it, so why keep it at all?

With home prices on the rise again, I'm tempted to sell my house sooner rather than later. The process of decluttering and staging the house overwhelms me, but imagining my home picture perfect for a photo shoot and visits from potential buyers inspires me. Plus, purging before a move would mean less to pack, unpack, and -- in the case of downsizing -- pay to store.

I've begun targeting an area to declutter about once a week and tossing more and more forgotten and unused items so I can have more room to store what I do use completely out of sight but close at hand. It's actually become a game, like working on a puzzle. I move what's obsolete out of the cabinets, closets and drawers and discard or donate it. That creates space for what I use, leaving surfaces relatively clear.

I think I've found a way for old stuff to amuse me again; I make it disappear -- and it's not even magic! 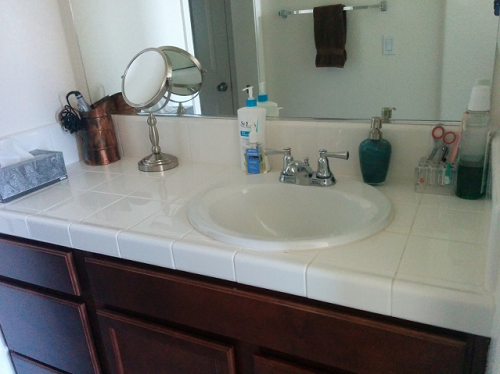 Purge your medicine cabinet, then hide the countertop clutter