One of these days I'll have enough time to tackle organizing my dad's whole kitchen. For now, I'm just trying to find my way around the cabinets and drawers that time forgot while trying to keep my life-in-one-room with a cat and dog organized enough for me to function day-to-day.

Meanwhile, Dad's kitchen gadget drawer had become a source of irritation on bad days and puzzlement on better ones. Dad has four or five different caregivers and a cleaning lady that visit him throughout the week. Between all of them coming and going, I haven't had time yet to figure out where each one prefers to put away the most frequently used kitchen tools, utensils and containers. Since I'm only here temporarily, I don't want to impose my will on anyone's system -- or lack thereof.

Unfortunately, the drawer was so full that the only way for me to know what it contained was to take everything out and put it back grouped loosely by function -- scoops of all sizes and shapes together; steak knives in one section; spatulas all together, etc.

I am not sure why everyone whose kitchen I've organized owns multiple flapjack turners, but Dad's drawer was no exception. Turners must be a thing. A favorite author of mine recently posted on Facebook that she was adding one or two more to her own collection of turners while on a trip to France. All her friends agreed you can never have enough of them. Unless you have a food truck that specializes in breakfast fare, I'm clueless about this popular culture phenomenon.

I'm not even sure if, as my mentor in home organizing told me, you need only one of everything, especially if you have no idea what that one thing is! I extracted two gadgets from the drawer that, try as I might using my vivid imagination, I could not come up with any logical use for any of them.

But that's why there's social media. Since it was an otherwise uneventful day, I decided to stir things up by posting the following 'What is this?' pair of photos -- even more fun than a political debate: 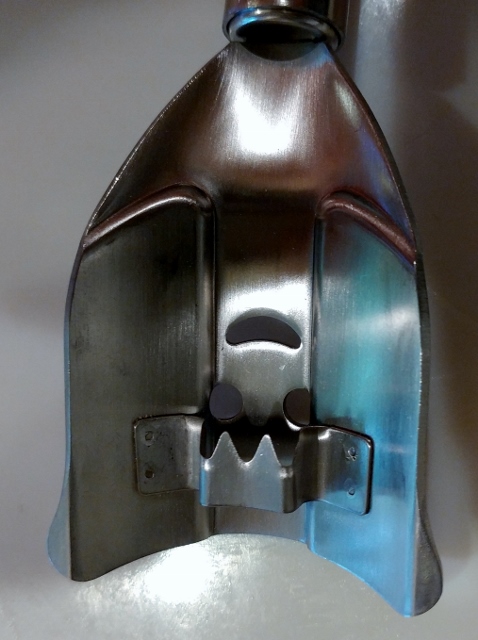 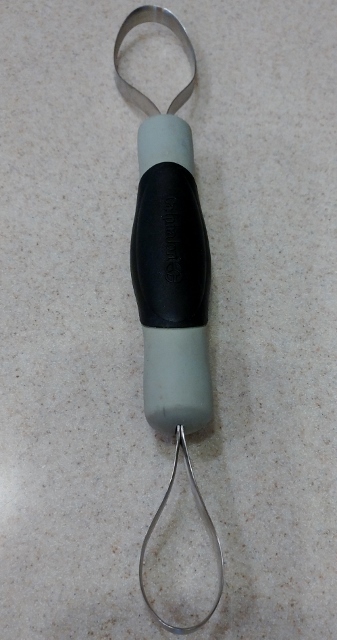 Early attempts at identification by my usual commenters included "Klingon blood-letting tool" and "elephant tusk sharpener." The tool with a metal loop on either end elicited responses such as "pigeon plucker" and "bronze sculpting tool."

With the help of friends with less imagination and more investigative skills, we finally found out the first was a "corn zipper" for easy removal of corn from the cob. The second was a "de-seeder" for extracting seeds from such foods as cucumbers, tomatoes and zucchini with the small loop, and avocado and peach pits with the larger one.

I am pleased to say that I was able to keep these handy gizmos, and we are actually putting them to use.

Create space for gadgets in a kitchen remodel

Things have begun disappearing into the gadget drawer again at warp speed. Next time, I'll thin out the contents and apply labels. But, if we budget for a kitchen remodel, I'll make sure space for various gadgets are incorporated into the design.