As I sit in my newly painted office staring at a homebuyer-friendly beige wall, I have to stifle an urge to jump up and run down the hall to my bedroom for a break from the beige blindness. Three walls of my bedroom also scream neutral, joined by the mounting number of beige and tan walls in the rest of the upstairs. Like casualties falling to the conquering army of brushes and paint rollers, every one of these neutral walls screams at me, "Murderer!" I walk past each with downcast eyes, feeling like a traitor after vowing my home would not be a white box - even worse, beige! I hope some hypothetical buyer is happy with my sacrifice. Actually, it's very serene…unfortunately to the point of boredom.

But here on the second floor of my home in my bedroom, my sanctuary, one wall defies this senseless massacre -- the blue wall behind my bed.

Take me to my (teal) blue heaven

Enough with the pathos and drama. After all, it's a wall. It's just that I never realized how much impact one blue wall could have on my psyche. I have to get up several times a day and peek into my bedroom to admire it…okay, more like revel in it as if I were submerging myself in a deep blue lagoon. It's crazy, I know, but I love this wall. I'm even more overcome when evening falls and the room, lit by one lamp, envelops me in a cocoon. I want to slip beneath my teal sheets and indigo duvet cover and never come out. All this serenity and peace from one blue wall.

Not so very long ago this bedroom wall was white like most of the walls upstairs. I'd bought this transformative blue paint last year, a stunning shade called Opal Silk by Behr, a cross between teal and turquoise. After painting two other bedroom walls a color that BFF insisted was pink, not beige, and was meant to evoke Venezia, I realized that next to those allegedly "pink" walls, the color combination reminded me more of Miami Beach. Unfortunately, after living in Florida for nearly two decades, anything that suggests a pink and aqua color scheme reminds me of plastic lawn flamingoes. As BFF was adamant about not repainting the wall -- not that I blamed her in the least - I decided to relegate the beautiful blue paint to the garage, destined to dry up, unopened. There was no other place for it in a house that was about to be neutralized. 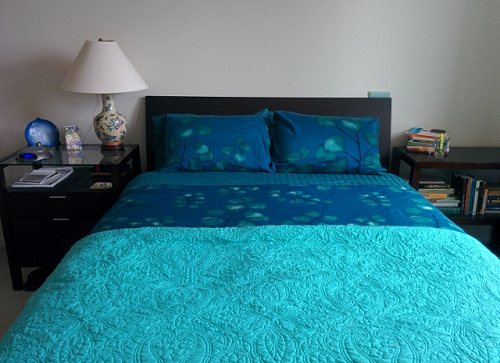 As BFF and I pondered day after day how to tackle the problem of walls that started downstairs and became part of walls that were also upstairs, we jointly concluded that our choices were limited by some of the colors we'd already painted in the house. I'm not exactly sure how (BFF would argue that it had something to do with my unenviable powers of manipulation), but we realized the best solution was to extend the beige we chose for the hallway into the bedroom, and she repainted the "pink" walls. Really, the color was not that much different, but enough so that I could imagine the wall behind the bed painted that sultry Opal Silk without conjuring visions of Florida retro décor.

I knew I liked the color, but I could never have guessed my reaction once I saw the paint on the wall and extended a couple of feet onto each of the two adjacent walls that architecturally lend themselves to wrapping the color around.

With the addition of an abstract cityscape found at HomeGoods that picked up all the right colors, my nighttime retreat feels unusually complete in its relative simplicity. Too bad if home buyers don't agree. They can repaint it. At least this isn't one of those 20-foot-high walls in the living room, next on our agenda for paint neutrality. 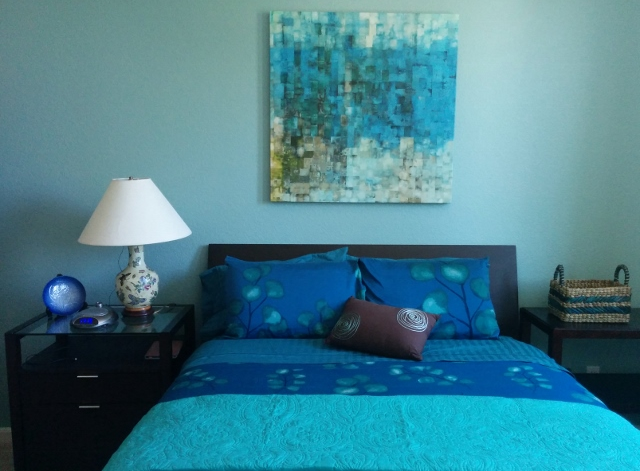