In a previous blog about choosing paint colors for my open-plan house, I mentioned that I created a mosaic tying the kitchen color to the other three colors I used to paint the first floor of my two-story home.

When I first explained to my best friend the brainstorm I had for installing mosaic tiles on that wall, she was just beginning to realize the scope of my grandiose remodeling plans that she was "helping" me execute. She was not impressed…not even a little. I decided to go ahead with the creative part of the process and see if she'd come around once I presented her with a design she could embrace.

My friend is not quite as bohemian as I am. In fact, she's a bit of a stuffed shirt, but we balance each other. I thought if I suddenly had a whim to sell my new house and move to, let's say, Bali, it might be in my best interests to follow her more conservative lead and keep the design simple. Prospective buyers might not be as enthused as I am about some artsy-fartsy tile work adjacent to the living room.

Since the one-foot wide section of wall in question could easily be construed as part of the kitchen, I opted to use some relatively innocuous Home Depot backsplash tiles. A trip to their tile department netted me three likely tile sheets, each of which included tiles in one or two of the families of my chosen paint colors. I brought them home to see which one I liked best. Of course, I liked all three.

The creative process: you have to cut loose

One sheet was a glass and stone combo of three-inch subway tiles in neutrals with some rust colors that picked up the cayenne red of the dining room. The sheet was laid out with the alternating rows of tiles falling at the midpoints of each of the tiles above and below.

Another comprised one-inch square glass tiles in shades of brown and golden yellow, perfectly matched to the brownish-gold hue of the kitchen.

And the last was a wild card -- two-inch wide aqua glass tiles, also in the subway-style layout. That turquoise/aqua tone was my accent color in the kitchen and everywhere else on the main level, as well as the paint color I eventually chose for the front foyer.

The Problem: The glass and stone tile sheets, which I loved because of the different textures and heights and the reddish-hue tiles, created 1½-inch spaces at the ends of the alternating rows, which meant the 1- and 2-inch tiles, if I were to try to integrate them, would have to be cut in half -- not an appealing task when you are working with such small tiles. I wanted the easiest way to lay out the design with little or no tile-cutting involved -- especially if my friend was going to agree to do it.

I decided on a vertical repeating motif using the glass and stone tile and the one-inch square sheets almost intact, but I couldn't figure out how to integrate the aqua tiles. I am not good at visualizing what I can't physically manipulate. That's one reason I like to have a collaborator. Luckily, my friend liked my plan (especially the part about making the design as easy as possible to lay out), so she was on board and ready to help. 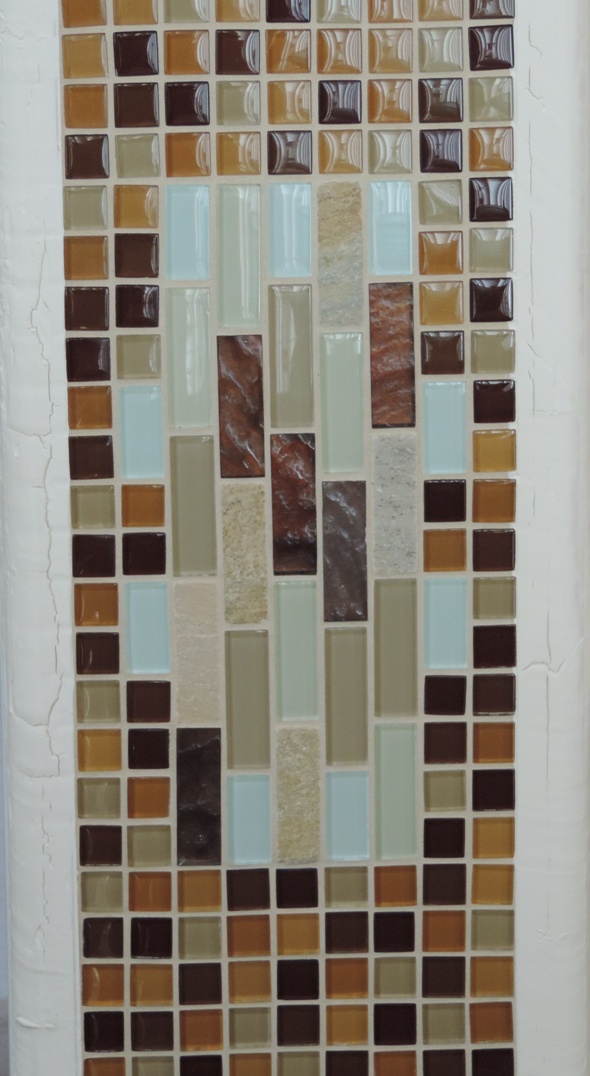 Knowing I wanted to use the aqua tiles, she took the sheet (which I was planning to return to Home Depot, having no idea what I could do with it) and began cutting apart the individual tiles. I panicked, knowing I was now committed to using them, but it didn't take me long to understand the lesson. If you want to be creative, even conservatively creative, you have to be fearless and take risks. Turns out she's a lot looser than I am when it comes to thinking outside the box.

The Solution: It was time for me to play with the tiles. We cut up all three tile sheets and began rearranging tiles and strips of tiles until we came up with a pattern that comprised five equal parts.

To make installing it easy, we assembled it on the kitchen island in five separate sections, each on a piece of plywood, leaving a portion of each board un-tiled. We filled those portions with segments of the one-inch tile sheets after the boards were screwed onto the wall.

Instead of laying the three-inch tiles alternating at half-tile intervals, we used one-third intervals, leaving one- or two-inch spaces at the ends of each motif that the other tiles fit into perfectly. 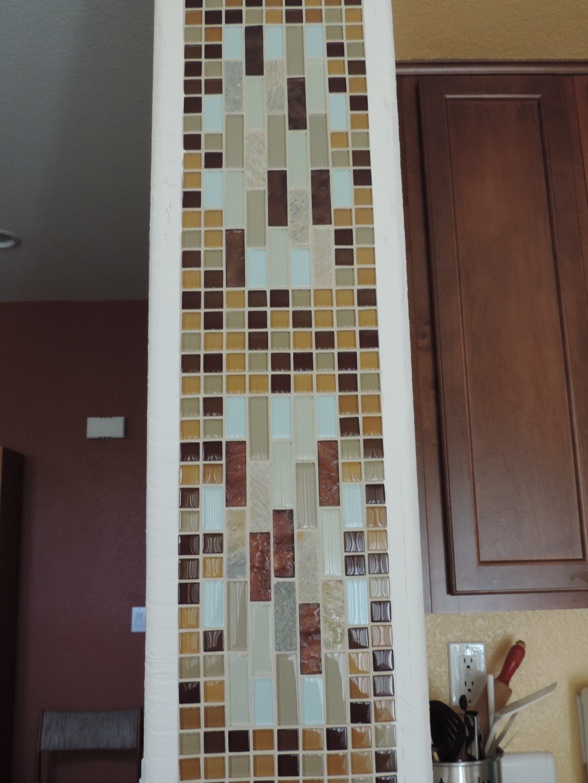 Even with the vertical orientation of the subway tiles, the result was a mosaic with an almost art-nouveau, turn-of-the-last-century feel. If anything, the design is reminiscent for me of 20th mid-century New York City, where elements of art deco were still very much in evidence -- classy and sophisticated. 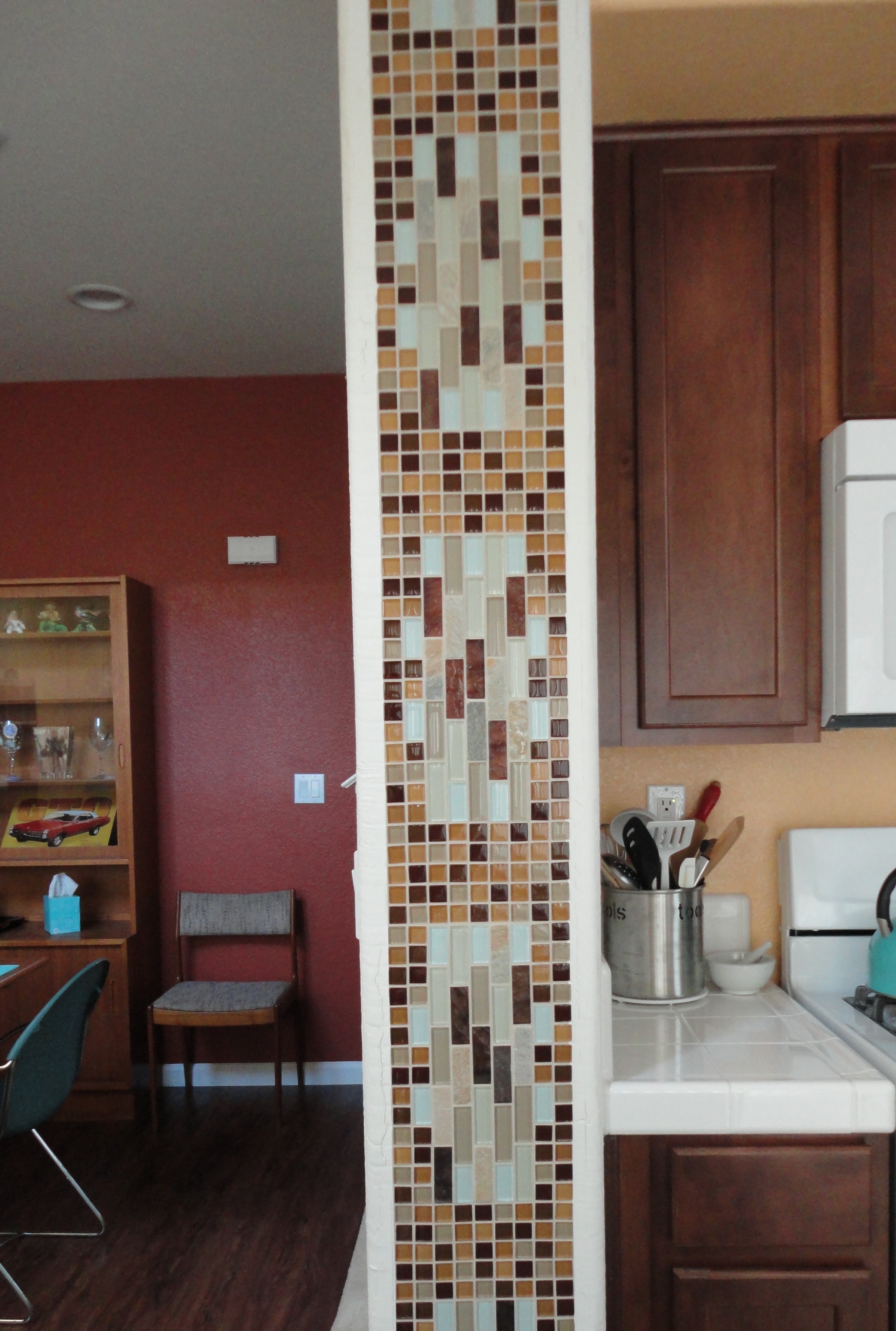 So apparently, I'm not quite as bohemian as I thought, but if I do have the urge to spontaneously move to Bali, I can tell prospective buyers how easy it is to pry the mosaic loose if they think it's a monstrosity instead of a masterpiece.