I am so thankful to the real estate agent responsible for marketing the house we bought. The photos online were horrible. And of the eight photos included in the listing, two were of the ridiculous bathroom, and none were of the gorgeous land -- hands down the best thing about the property. I came across the listing about a half dozen times over the course of several months before we finally went to see it. The house had been on the market for a year by then. I'm sure it would have gotten snapped up much sooner (and at a higher price tag) had it been marketed better. So thanks, Halstead!

Back to the bathroom. Here's a photo almost identical to one included in the listing: 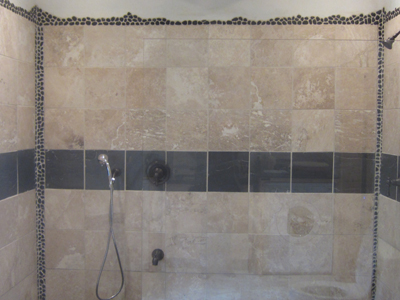 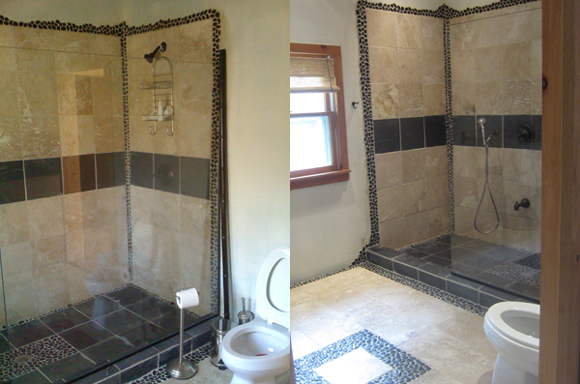 There's a similar theme going on around the vanity. I don't understand how or why this design happened. We're gutting it.

The current footprint of the bathroom is outlined in yellow on the floorplan below. 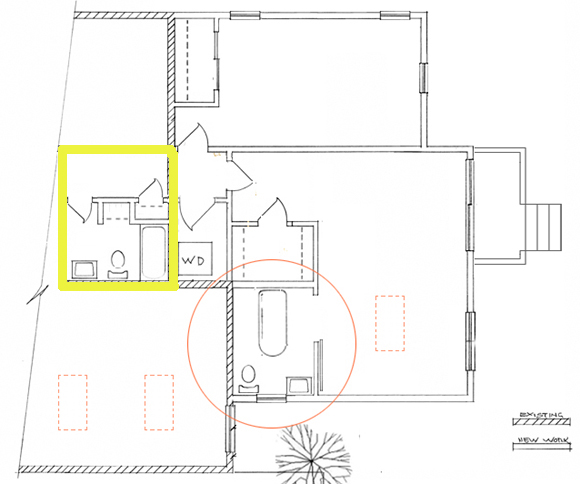 The current bathroom also contains the washer and dryer, they'll be moved to their own cozy laundry room next door, and we'll add a hallway, a linen closet and open shelving inside the bathroom. We're still making some decisions on fixtures and materials. For example, we're looking for a small, modern pedestal sink. We were leaning towards Kohler's Wellworth model, now we're not so sure. We have sorted out most of the master bathroom details, so let's discuss that.

The master bathroom is circled in the above floor plan. We're still playing around with the placement of the toilet and sink. I think we may swap them, and they will be facing each other, not against the exterior wall as shown, to reduce the risk of frozen pipes. The clawfoot tub will stay pretty close to where it is, maybe a few inches closer to the wall. I know it seems like a strange configuration, but when soaking in the tub with the sliding barn door open there's a lovely view. The sightline extends diagonally across the bedroom to the sliding glass doors and beyond. This is important because baths are important.

We bought the clawfoot tub below for $200 at Build it Green in Brooklyn, a non-profit retail outlet for salvaged and surplus building materials. The outside needs some attention, but the interior is in great shape. 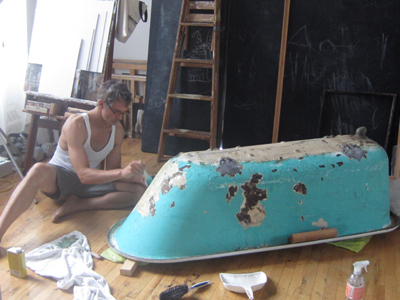 In the shot above my husband is testing the tub for lead paint. It tested positive, as we expected, so we moved it up to the property where we can strip the paint off when the kids aren't around. As you probably know, lead paint is extremely toxic to children, it interferes with the development of the nervous system and can cause brain damage. Here's the tub now. 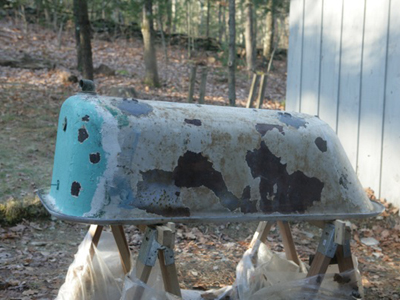 Below is a piece of paper I found with some early sketches of the master bathroom layout, when we were exploring ideas. The illustration in pink is my 3 year old's contribution. Between my two daughters, almost any unguarded piece of paper will eventually be covered with doodles. 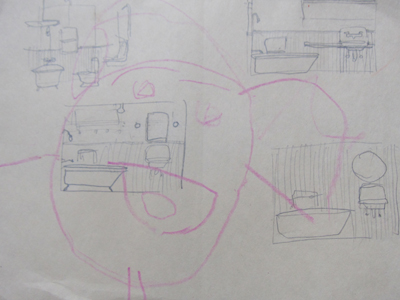 We bought an old sink at Build it Green too, for $80. At first we thought we'd build a platform to drop it into, but now we're thinking we'll just hang it as is, at least for now. Still not sure what we want to do with the walls. Here are three options:

I'm leaning towards the third.

Check out that sexy faucet. It's the KOHLER K-8924-CP Knoxford Service Sink Faucet, in polished chrome (it also comes in rough plate, which we considered, and which would probably look less smudgee). We ordered it off of Amazon for $183.58. It's heavy and simple, utilitarian yet elegant. I never thought I could get so excited about a faucet. 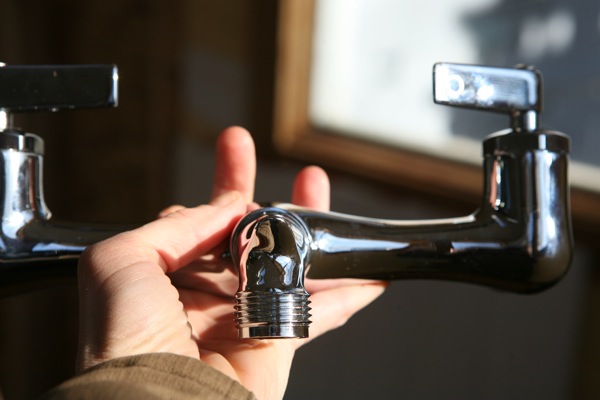 Below is a sample board. We're settled on the pennyround tiles, the sink, medicine cabinet, faucet and tub (hoping ours will have a similar finish once stripped), still thinking about the wainscotting and the shower fixtures. 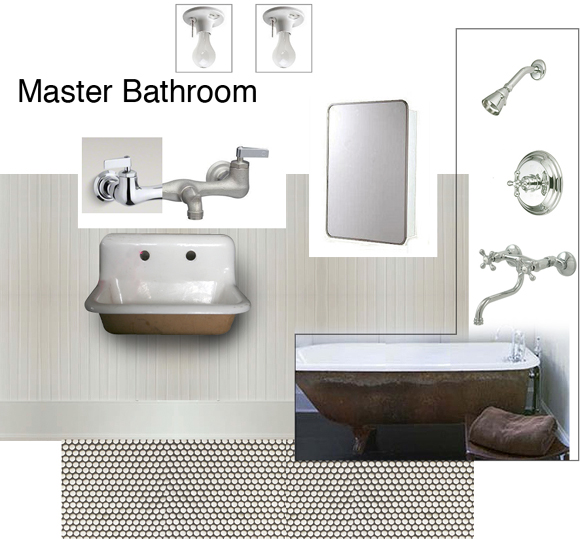 We just returned from the house last night and are once again amazed by the progress. In my next post I'll share photos of our newly framed addition.