How to make a vacation dream home come true

If you are of modest means but have big dreams -- like me, for example -- and you wish for a vacation home in some faraway place, you might have to think outside the box. You also have to watch the market and economy, among other things, in your dream locale -- sometimes for years. And you may also have to watch your pennies for years. It also doesn't hurt to know someone who has actually succeeded in making such a dream come true. It helps you visualize. If your friend made it happen, why not you, too?

I have such a dream…and I have such a friend. We recently visited when she was just a few hours away from me in a major cultural hub where I once lived. She was hopping between homes, of which she has several, but she's far from being what you would consider "wealthy." She also doesn't actually hop. That's tough to do when she's hand-carrying decor that costs a fortune to ship across continents, but she's not complaining a bit. She seems to be enjoying whatever it takes. In between traveling and decorating her homes, she's a freelancer, filmmaker and online writing teacher, jobs that typically don't pay much. Vigilance, timing, and desire seem to be the keys to her success with real estate.

She doesn't own all of her homes. A couple are flats she's leased for years and sublet. One she co-rents with one of her former long-term tenants. Others she was able to purchase when the market was favorable, she had a small windfall, or she was able to do some short-term financing with credit cards -- not usually a recommended strategy, but it worked for her. Another she bought many years ago and has rented out until recently. She's about to make that one her primary residence after she does some serious renovating. How does Italy, Portugal, or Hawaii sound? 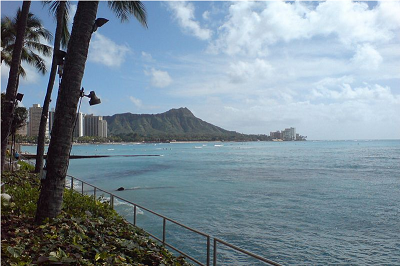 My friend is peaceful, beautiful, and above all, happy. I know it's not an act because my dog, that high-strung creature I struggle at times to control, was absolutely blissed out from the time she stepped through the front door of my home. I am trying to keep the gentle vibe going now that she's left. But far from lounging around in a meditative state while she was here, we were constantly on the go.

When she arrived, she brought with her a couple of bags of clothes, not to wear, but to sell at a vintage clothing store here. She also brought a bag of books to sell at the used book store. What she couldn't sell, she donated. What she made from selling the clothes helped finance our fun times while she was here. With her encouragement, I weeded my own closet and netted $26. Then we hit some other thrift, consignment and discount stores to buy home goods. She knows how to live on the cheap, and yet she always looks magnificent. I've not yet been inside her homes, but judging from the finds she bought here to carry back to Hawaii, I can tell they are as classy as she is. She purchased a wall sconce at a lighting store that was a close-out -- originally $700 and marked down to $180 -- sculpted glass in a very, as she referred to it, organic design. It looked as if it had tumbled out of the Hawaiian surf.

The point is that you don't have to be rich to be happy, or to make your home your castle, or have an extra castle in Spain -- or wherever your heart desires. It may not be easy, but it's definitely possible -- and judging from my friend's experiences, worth every effort.