Fireplaces without the fire? 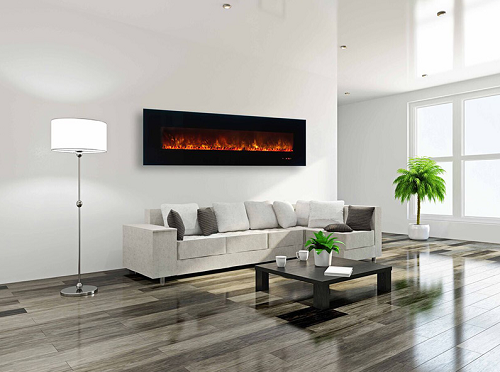 Since the dawn of humanity, we've been seduced by the allure of fire. I believe it was either Shakespeare or Yogi Berra who said "Fire. Good." Historically, fireplaces were used to prepare food, dry laundry, and to heat rooms. As new technologies like the Franklin stove emerged, the role of the hearth in the home became less important. By WWII, gas and electric stoves, central heating, and clothes dryers eliminated virtually all of the utilitarian needs for a fireplace.

Yet the romance of a fire never goes away. It is one of those biophilic things that is hard-wired into our brains. We love to be near things that are conducive to life. Fire means food. Food-writer Michael Pollan says, "Fire is a very powerful thing. I think a lot of it goes back to that this is a sign you're going to get fed." Humans are universally intoxicated and mesmerized by fire.

Back in the 70s, wood-burning fireplaces were nested in conversation pits adorned in orange shag carpet, while Barry White seduced lovers sipping Chardonnay. But after one-too-many rounds of Pepsi and Pop Rocks, the disco era gave way to gas starting fireplaces. Still adding wood was too burdensome. In the 80s came the gas burning fire place with ceramic logs. By the 90s, someone realized that if we don't need wood in our fireplaces why do we need fake wood logs. Thus emerged the minimalist fire pit filled with glass with remote control starters.

But wait. There's more. The traditional fireplace has gone the way of all that is good. Enter the flameless fire places. Yup. Fire without flames. Simply plug them into a 120v outlet and light it up. It is the equivalent of artificial plants which ain't foolin' anyone.

The LED fireplaces are usually linear, stretching up to 100 inches. Like their gas-powered cousins, they offer choices of a variety of glass stones for the base. Unlike gas version, LED fireplaces hang on any wall without the need for any ventilation. You can hang them protruding a few inches from the wall or flush mount. They take up very little space.

The illusion of fire is created using hundreds of high-powered LED lights. From a distance, you might think that it is a real fire. It certainly beats the 8 hour video of a fireplace on loop on YouTube. However, the YouTube video does crackle.