Once upon a time there were four little throw pillows. They were new and clean. They were perfect for my green retro-'60s naugahyde sofa. They picked up the colors in my living room. They made me happy -- until they met my three little kittens and my dog and suffered the usual wear and tear that nice things do when exposed to a house full of pets. 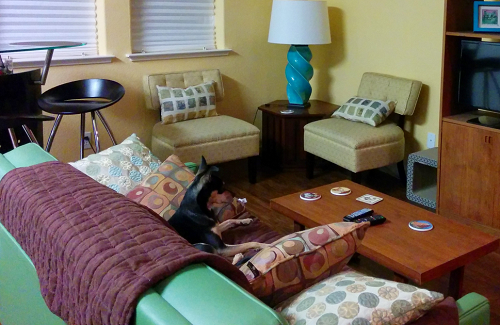 In this same house was an inexpensive entryway bench - cheap quality, but newer than the pillows. Starting life as a place to hide kitty litter boxes, the bench was destined to meet with a little abuse from the cats sooner or later -- I had hoped, however, not quite that soon. Due to some territorial issues between the cats and the dog, the vinyl cushion on top became soiled with a scent that only cats -- and some juniper bushes -- produce. Luckily, the odor was confined to the cushion. 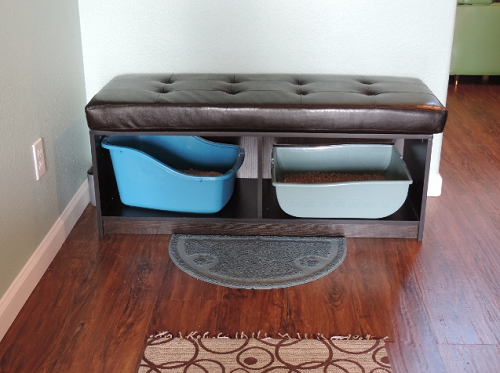 I treated the cushion with all sorts of home remedies for pet odors, and even took it outside and hosed it down, but, alas, it was not salvageable. One thing I should have known after having cats for more than two decades -- unless you treat the soiled item with enzymes and then put it through several washing and rinsing cycles in a machine, you should get rid of it. I replaced the litter box/storage bench arrangement with one large litter box and threw out the bench cushion.

Having no cushion to replace the ruined one and wanting to keep the bench as a place to remove shoes and boots when entering the house, I took three of the not-so-new throw pillows originally on the sofa and put them on the bench as placeholders. They actually fit the space perfectly. Again, I was happy -- sort of. They just weren't very appealing in their worn condition, but they were in way better shape than the cushion they replaced and useful in their repurposed state.

To sew or not to sew: Would I still know how?

Whenever I passed a fabric store, I'd pop in to browse the colorful bolts of material in hopes of finding something that inspired me enough to take my sewing machine out of the box after years of storage. Nothing I saw moved me enough to take the old Kenmore down from the laundry room shelf and dust it off. I had anxiety about using it and wasn't even sure I remembered how -- it had been that long -- but I hoped that when I did, it would be like riding a bicycle. If not, there were always YouTube videos to help.

Recently, I found myself running an errand in a part of town where there is a huge fabric store the size of a warehouse that I'd been wanting to visit. So I did. Sure enough, I found just the fabric I wanted. I waffled on whether to just get some heat bond and iron the covers closed instead of seaming them by machine, but the saleswoman encouraged me to sew them. Unfortunately, it had been so long since I'd measured the pillows that I nearly got too little fabric. But all's well that ends well. I had just enough. 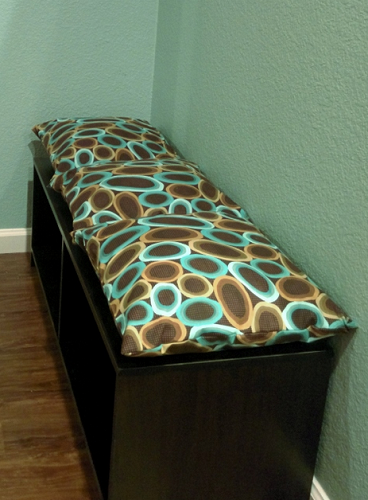 As for using the sewing machine, my old home economics teacher from junior high school taught me well, and after reviewing the owner's manual for specifics, I was off and running the machine. Thank you, Miss Crosby, wherever you are in this universe, for supplying me with the basic knowledge of how to sew by machine. I am not a great seamstress, but the results -- even if not perfect -- are nonetheless pleasing and extremely cheerful in my entry.