With Thanksgiving less than a week away, I’ve been thinking about gratitude. I’ve also been taking part in a 21 day meditation experience (Deepak is my boy!), which has definitely helped me to feel more centered and grateful.

Yesterday’s centering thought was: “What do I want?”

While meditating, or rather, while attempting to sit still and not get distracted (as close as I've gotten to meditation) I allowed the material desires to present themselves first -- because I'm human! A hot tub, ping pong table, a kitchen table. I realized that the majority of the material things I desire relate to comfort, to family, and to home. I desire to create an environment in which my family and friends can enjoy themselves and be comfortable. These material desires are directly influenced by the desires of my heart: to be a good mother, a good wife, a good friend. None of this is a revelation, just a simple reminder, I guess. I also want a new snowboard, for what it's worth. (Santa, are you reading?)

But getting back to gratitude. I'm so thankful for this little country home! In a few of my past posts I admit to having been overwhelmed, grumpy, or frustrated. But not today! I am full on grateful for this little blue house, this plot of land, for what’s already been accomplished, and for the possibilities that lie ahead.

We’re still settling in here. So far our daughters’ bedroom is the only fully furnished room in the house, and I thought I’d share some photos of the transformation.

Last year around this time the girls' bedroom looked like this:

A few months later it looked like this inside: 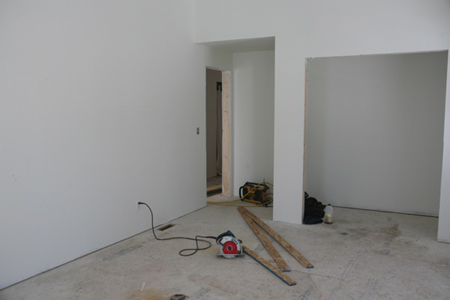 And from the outside it's the room to the right, (on the left is the master bedroom):

These days, the room is simple, but cozy.

The mobile is one of my husband's creations. Funny story: many years ago, before we had children, we had breakfast at one of our favorite joints: the Just for You Cafe in the Dogpatch neighborhood of San Francisco. Afterwards, while walking to the car, my husband asked me to toss him the keys. He didn't catch them ("the sun was in my eyes!") and they landed on a sewer grate, and then plunk - they were gone. We found a coat hanger and tried to retrieve the keys, but no luck. We then called the city and unbelievably they sent a truck out to remove the sewer grate and get the keys. Apparently all you have to do is ask. While waiting for the truck we sat in the shade, up against a brick wall. I was reading a magazine when my husband said "here" and handed me the coat hanger, which he'd bent into the shape of my profile. He filed it away for several years -- he saves everything -- and later it resurfaced in this mobile.

You'll notice a white strip of paper under the bottom drawer of the dresser; that's newspaper. It was there temporarily to cover the coffee grounds that my husband poured over the bottom of each drawer, intended to combat the smell of mothballs.  We found this dresser at Restore in Hudson a resale shop affiliated with Habitat for Humanity that sells donated building materials and furniture. It was in great shape, and only $35 dollars, but smelled pretty bad. Coffee grounds did the trick. Now my daughters smell like baristas, but that's preferable to the pungent stench of mothballs.

The painting on the wall to the right, a cat holding a kitten, is by local artist Earl Swanigan. His work is easily recognized by Hudson locals. You can't walk down Warren street, the main strip, without seeing a half dozen Earl paintings. He specializes in dogs, cats, and chickens "doing things like humans would do." It was our second purchase for the house (the first was a mattress). Bed first, art second I always say. The heart shaped chalkboard was my husband's idea. If you want to try this at home, Benjamin Moore has a good chalkboard paint.

The bunkbeds are from IKEA (the Norddal bunk bed). Pretty good for the $300 price tag, though a little creaky. The mattresses cost another $100/each, so the double bunks added up to around $1,000 total. Not bad. We originally planned to paint them white, but after adding a black dresser, black drumset and artwork, they looked OK. At least the girls seem to think so.

And by the way, their room has been this tidy exactly once.