First of an eight-part series on bathroom remodeling

Have you been wondering what a full bathroom remodel entails? In this eight-part series you will see step-by-step details and photos of the transformation from a modest, 1980s-era, master bath -- - fiberglass shower, no tub, vinyl floor, laminate countertop and budget, off-the-shelf cabinetry -- - to a completely new bathroom with heated floor, upgraded cabinetry and marble for the shower, counter and floors.

A total bathroom remodel starts with, unfortunately, a total bathroom deconstruction. If you are like most do-it-yourselfers, the tearing out is the worst part of a renovation -- rife with dirt, dust and noise. But even if you are having a bathroom remodeling contractor do some of your work, you can save a lot of money by doing the dirty work yourself.

We start by removing the cracked, leaking fiberglass shower and repairing a slightly rotted joist. 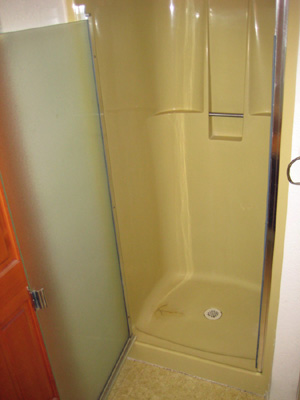 The cracked shower floor is the motivation for what will become a total bathroom renovation.

Shower removal begins with pulling out the faucet handles and shower head.

The shower head and pipe are screwed into a brass fixture behind the shower wall. It has a trim piece over it, probably held to the shower wall with a bead of caulking. Run your utility knife around the cover to break the caulking loose, then unscrew the pipe and shower head from the fixture behind the wall. You may have to use vice-grips to unscrew the pipe.

The faucet is typically secured to the valve with a screw, hidden by a small cap that can be pried off with a screwdriver or utility knife. Alternately, the handle might be held in place on the bottom by a small Allen head setscrew. A trim plate, usually held by a couple of screws, covers the water-flow control valve behind the wall. The plate might be sealed to the wall with a gasket or a bead of caulking. If so, loosen it with your utility knife.

A fiberglass shower stall has an inch or so flange that is nailed to studs. Drywall overlaps the flange.

Bash the shower wall with your hammer to get a hole large enough for your saw blade to fit through, and start cutting. Slice the wall into parts small enough to handle easily. Along the flange edges, pry and pound till the flange pulls loose from the wall. You may have some unavoidable drywall damage; this becomes a moot point if you are going to expand your shower area beyond the dimensions of the old shower, as we did in this job. The old, 32-inch shower grew to 35-by-42 inches.

While sawing the fiberglass, watch out for the piping and wiring behind the walls. If you are in doubt about the location of wiring and plumbing, carefully cut out small panels of the shower wall so you can see what is behind before you commit wholesale mayhem.

It is very possible you will find water damage under the shower. This particular project was spurred by a cracked shower that went unreported by the renters in the house, causing damage.

Cramped and cracked, the old 32-inch fiberglass shower is coming out. The new shower will be 35 inches-by-42 inches.

Fortunately, the damage was minor, with only slight decay at the bottom of a joist. 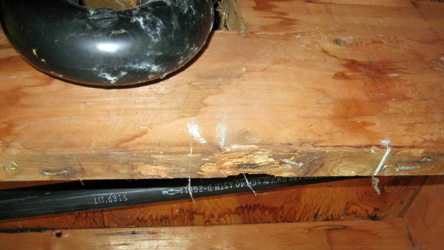 Actual damage from the leaking shower was, fortunately, limited to a small bit of rot on a joist.

You can remedy this type of damage by simply cutting out the decaying area of the 2-by-12 joist and sistering a new joist in its place.

The old ¾-inch plywood underlayment had a large hole cut in it to accommodate the drain that attached to the old shower stall.

The old shower drain came through this gaping hole in the floor and attached to the fiberglass shower stall. The new hole needs to fit the drain snuggly, so that the flange can screw into the floor.

The new drain flange needed a snug enough fit to screw into the underlayment. We solved the problem by gluing and screwing a new piece of 5/8-inch plywood into the base of the shower, which provided a snug hole to attach the new drain and added reinforcement to the floor.

Five-eighths-inch plywood was screwed and glued over the old subfloor, and the new drain base was screwed into it. Also, 2-by-10 blocking was added between the studs to provide backing for the vinyl lining that is part of the impervious shower pan, which will be built later.