When your guests ask to use the bathroom, do you direct them down the street to the nearest convenience store? If the answer is "yes," you might be ashamed to admit you have a funky bathroom.

Not nearly that bad, you say? A funky bathroom isn't necessarily stinky or dirty. It could be poorly designed for storage so that you're in danger of getting clobbered when you open the door. It could have a few weird decorating quirks, or just some "issues" you've tolerated for too long. One too many problems, however, and it starts to feel like an embarrassment.

Here are five funky bathroom scenarios and what it might take to fix them. If you recognize your own bathroom in any of these descriptions, feel free to be motivated to take action, or suffer the shame when one of your kids' wisecracking friends hangs a "Condemned" sign on your lavatory doorknob. 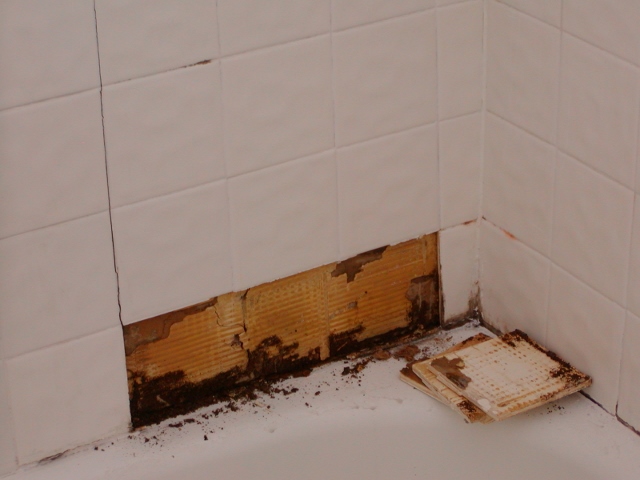 Funky bathroom No. 1: The horror of the Bates Mold-tel

Do you scream in terror every time you pull back the shower curtain? If it's not the famous scene from Psycho looping on your flat screen, it could be mold -- and perhaps just as deadly. Bathrooms are notorious as a breeding ground for mold, and the longer you ignore it, the harder -- and more costly -- it is to rid your home of its hazardous effects. A little mold, for example on the shower curtain, can be washed away with inexpensive fungicides such as borax or white distilled vinegar. If it's just on the painted wall or ceiling surfaces from condensation, you might be able to get away with scrubbing with a fungicide and then painting over it with a primer, such as Kilz, designed to inhibit further mold growth, before you repaint. However, areas that show signs that mold has penetrated walls, ceilings, or floors will need further investigation to get to the source and fix any leaks. If the mold turns out to be extensive, you'll need the guys with the hazmat suits who specialize in mold remediation.

Funky bathroom No. 2: My tub runneth over

Hair in the drain from Lady Godiva's tresses? Probably not; just your teenage daughter's lengthy locks from daily shampoo and conditioning goo, or your tiny tots' Lego aircraft carrier pieces plugging up the works. One problem from clogged bathtub drains -- aside from the icky standing water in the tub -- is that unless you are scrupulous about scrubbing, it takes no time at all for that bathwater residue to form a funky film. And if it's in a shower stall, you may be flooding the bathroom every time someone uses it. Don't call the plumber in just yet, however. Removing the drain plunger and extracting as much of the hairball as you can get at with a needle nose pliers or even a flexible bamboo skewer might do the trick. Flush with a pail full of very hot water, and let the water run full throttle from the bath spigot to see how well the tub drains. If it's something more serious that's stuck in the drain pipe, you may try snaking it as a last resort before calling a professional.

The sky is not falling, but if bathroom tiles start dropping from the tub surround and hit you on the head, it could be nearly as catastrophic, even if you don't suffer a concussion. Tiles that just drop off the wall might have been installed improperly, but chances are the wall behind them has already suffered from some water damage. Worse yet is when the studs are rotted and/or moisture-loving, wood-chomping insects like carpenter ants or termites have been dining on your walls. Then the fix involves tearing everything out down to the studs and replacing the wall. But take it one step at a time. First, carefully pry off the surrounding tiles, and check the drywall for spongy areas. Don't stop removing tile until you have exposed at least one row of unaffected drywall on all sides of the damaged area. You will have to remove the damaged drywall and replace it with a product like HardieBacker® cement board for walls that are exposed to water before you reattach and re-grout the tiles.

Funky bathroom No. 4: (Don't) Put it on a pedestal

You might not mind being put on a pedestal, but if you have one of these elegant sinks in your bathroom, you probably can't put much on it. Building a niche with a couple of shelves between the studs is one way to make room for the little things that you would put on the counter -- if you had one. Floating shelves are another elegant solution. If vertical space is not available and all other bathroom storage is taken, slide a short, skinny, free-standing tower beside the sink. Put a small tray or decorative catch-all on each shelf to hold the few small odds and ends like brushes -- makeup, tooth, and hair -- or cottony things -- puffs and swabs -- that you use near the sink every day.

Funky bathroom No. 5: About as much fun as a wet towel

If blaming the builder for not thinking of leaving room for towel rods is making you grumpy about your family leaving wet towels around, get over it. You don't need to play the martyr and wash the towels daily, either. Take the hamper out of the bathroom and replace it with a heated towel rack. No space? An over-the-door contraption with six hooks can be as little as $10 or less at discount stores like Ross, TJ Maxx or Marshalls. If your bathroom is tiny and the damp towels add to the funk, hang the towel hooks on the outside of the bathroom door and get some of those fast-drying bath towels. Still too much dampness in the bathroom? Replace your exhaust fan if it's dusty and dysfunctional from dis-use, and run it whenever you shower -- and for at least 20 minutes after.

You can ignore your bathroom only so long. When you start telling your family you are going to the convenience store -- to buy, um, cigarettes, but you don't smoke -- you have a more serious problem. It may be time to face the funky facts and clean up your bathroom's act.