Think your home can't flood because you're not in a flood zone? Don't bet on it. Floods can be caused by tropical storms, hurricanes, heavy storms and the like. But floods can also be caused by broken levees or dams, excessive snow melt and spring thaw, ice jams, new development and even runoff from charred ground after a wildfire.

The rule of thumb is simple: almost anywhere it rains, a flood can occur.

Many homeowners believe their home insurance policy will cover flooding, but in most cases, it will not. That was a harsh dose of reality for those in the path of Hurricane Irene in August of 2011. "A good 70 to 80 percent of the claims that I was called out to inspect did not have proper insurance coverage," said Dan Odess, the president of East Coast Public Adjusters Inc. 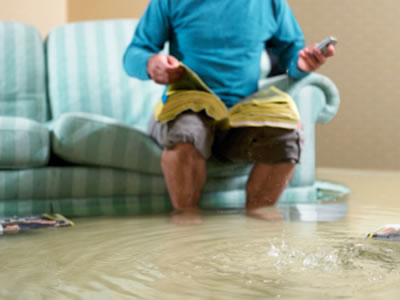 For many who live away from immediate flooding danger, flood insurance might seem like an expensive way to protect against something that might never happen. But the numbers don't lie: according to the National Flood Insurance Program, a mere two inches of water in a 2,000-square-foot home can lead to at least $21,000 in damage. Floods can be especially devastating to those who live in older homes, as the replacement value of original materials could cost more.

Wading through a disaster

Lisa Hammond of Windham, New York suffered significant losses when flooding from Hurricane Irene invaded her 1884 Victorian home. "I have never in my life seen so much water," Hammond said. "It was pouring in. It sounded like a pipe had burst, it was flowing in so fast."

As if the damage to her furnace, water heater and appliances when the basement flooded wasn't enough, there was structural damage to the home as well. "The water tunneled itself under the house and blew out one of the support beams in the basement," she explained. "The house dropped in one corner and the floor in the foyer buckled. All my doors are hard to open and close; everything shifted that much. The garage tipped off its foundation."

The damage came as a complete surprise to Hammond, who does not live on a flood plain and wasn't required to have flood insurance. Her homeowners insurance won't cover the damage, so now she has turned toward the Federal Emergency Management Agency (FEMA) for help. "FEMA says they will cover a lot of damage," she said. "I hope they do."

Get protected before the rain starts

For homeowners looking for flood insurance, Odess offers valuable pointers. "Homeowners should make sure they go with a reputable agent who can offer a wide variety of options. Start by getting quotes from at least five different agents, and keep in mind that the cheapest agent is not necessarily the best."

You should also make absolutely sure of what coverage you have. "Ask for a certified copy of your insurance policy so there are no surprises," Odess said. "Insurance is meant to protect you, but if you don't know what your coverage is, you might be paying good money for something that won't help you when you need it."

Finally, keep in mind that flood insurance doesn't kick in until 30 days after the purchase, so make that leap before the waters start to rise.

Shannon Dauphin is a journalist and occasional novelist with a serious weakness for real estate. Her current home was built in 1901, so home repair and renovation have become her necessary hobbies.

Get a Free Basement Remodeling Estimate