When is your older appliance over-the-hill?

Supposing the heating element gives out on your five-year-old dryer: Do you replace the element or is it time for the whole dryer to go?

Knowing the life expectancy of common household appliances is a must for every homeowner. Not only can this information help you decide whether to make repairs, it can also be a factor when determining whether to spend big bucks on an appliance or settle for a more basic model. 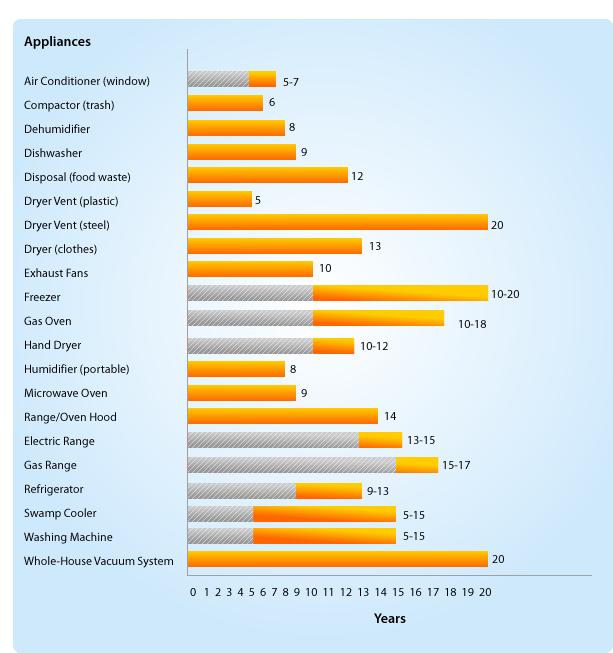 Replacement cost: From $250 for a basic standard dishwasher to $1,800 for an in-sink dishwasher.

Once a luxury, dishwashers have become a standard feature in many households. The best models can quickly and efficiently clean a load of dishes with only minimal effort from you. Cheaper models can be noisy water-wasters, but the Department of Energy notes newer Energy Star models are a vast improvement from those manufactured in years past. While dishwashers made before 1994 often use more than 10 gallons of water per cycle, today's energy efficient dishwashers use 5.8 gallons or less.

Replacement cost: From $350 for a budget top freezer model to $3,500 for a cabinet-depth French door model. Side-by-side and bottom freezer models typically have prices starting at $700.

Your refrigerator isn't just a convenience, it is also important for your family's safety. Food stored at improper temperatures can quickly grow dangerous bacteria that pose a significant health risk. Like dishwashers, new refrigerators are much more efficient than older models. According to the Department of Energy, new Energy Star models use 40 percent less energy than conventional refrigerators sold in 2001. In 2012, Energy Star found the most efficient refrigerators were bottom-freezer models.

Unlike some household appliances, ranges come in a variety of configurations. You can have a cooktop added to a counter that may or may not have a built-in oven beneath it. If you don't need a lot of customization, free-standing ranges are a popular option that provide baking, roasting and stovetop capabilities in one convenient appliance. Meanwhile, convention ovens are a high-end option to speed up cooking times. Ranges can be powered by either electricity or natural gas. Electric ranges can be less expensive to purchase but more expensive operate.

Replacement cost: From $50 for a compact countertop model to $2,000 for a built-in convection microwave.

Negative reviews for uneven cooking and possible, hidden health hazards have done little to discourage the popularity of microwave ovens. They provide the ultimate cooking convenience. Even better, these appliances can often be purchased for relatively little cash when compared to other household appliances.

According to the Good Housekeeping Research Institute, the typical American family does more than 400 loads of laundry a year. To get all those clothes fresh and clean, there are dozens of washers available on the market. While top loaders can be convenient, they can also equal a lot of water down the drain. The Environmental Protection Agency says traditional machines can use between 27-54 gallons per load. Meanwhile, newer front loaders and high-efficiency top loaders use less than 27 gallons to make your laundry sparkle.

Once your washing machine has worked its magic, it is time for the dryer to do its job. Hanging laundry on the line can be cheap, but nothing beats a dryer when it comes to turning out soft and fluffy clothing. Electric dryers can be less expensive to buy but more expensive to operate as compared to their gas-powered counterparts.

Replacement cost: From $120 to $700 depending on cooling capacity and features (current pricing per Home Depot).

For those who don't have central air-conditioning, window units are one way to keep cool on hot summer days. Easy to install and affordable to run, window air conditioners are a popular choice for those who don't want to invest in a whole-house system. Purchase one based upon the number of BTUs (British thermal units) you need to cool the size of the room.

If you're on the fence about whether to repair or replace an appliance, calculate what you can save in energy costs during the expected life of a newer model. It could tip the scales in favor of getting that quieter dishwasher sooner rather than later.

Maryalene LaPonsie has been writing professionally for more than a decade on topics including education, insurance and personal finance. She holds a Bachelor's Degree in Political Science from Western Michigan University.