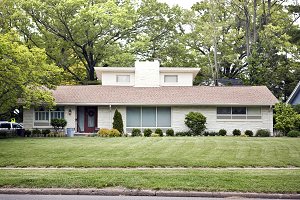 If you're buying a home today and you're young and healthy, you probably aren't thinking about grab bars in the shower or wheelchair accessible doorways unless someone in your household has a physical disability. But if you are over 50 and expect this to be the last time you have to move, or have aging parents who might live with you now or in the future, it doesn't hurt to think strategically. Buying a home that already incorporates the best universal design ideas -- if you can find one -- can make it so much more accessible for anyone with even a mild disability.

Especially in older, private homes, built-in accommodations for aging or otherwise disabled householders are still rare. A 2014 study from the Joint Center for Housing Studies of Harvard University reports, "Millions of older adults who develop disabilities live in homes that lack accessibility features such as a no-step entry, single-floor living, extra-wide doorways and halls, accessible electrical controls and switches, and lever-style door and faucet handles," all of which are common universal design elements. Some can be added inexpensively, of course, like changing door knobs for levers, but others, like widening doorways and halls involve expensive, major remodeling.

In the Sunbelt -- places like Arizona and Florida where retirees have been flocking for decades -- many homes feature one particularly desirable element of aging in place design: they're built on one level. There are no stairs to negotiate. More homes in older, established communities such as those in the northern and midwestern regions of the country often have more than one story, or a maze of levels, sunken and raised rooms, or basement stairs. Unless the main level already has, or can be remodeled with, a bedroom and en-suite bathroom, or an elevator can be installed, it's going to be challenging if not downright dangerous to navigate for someone who has trouble getting around.

The Harvard study highlights the certain need for accessible (or as it's sometimes referred to, barrier-free) housing as one of several major concerns for an aging population: "About one in four adults aged 50 and over has difficulty with hearing, vision, cognition, or mobility; by age 85, that share is greater than two in three (68 percent)." Mobility issues are the most prevalent. According to the Centers for Disease Control and Prevention (CDC), falling is the primary cause of injury and injury-related deaths for those over the age of 65. Minimizing obstructions and slippery surfaces is crucial.

In addition to the elements previously mentioned, just a few of the other universal design features that make a home accessible for adults who are aging in place include the following:

While not technically an element of universal design, minimizing hard surfaces for less echo and adding noise-dampening treatments can improve acoustics for those with hearing impairments.

Some states and localities have begun providing incentives to at least build in "visitability" features for homes that any of your household members and guests can easily access: wide interior doors, a wheelchair-accessible, main-floor bathroom and no-step entries. Others mandate those features for all new-construction homes.

The National Association of Home Builders' (NAHB) 55+ Housing Market Index shows strong builder confidence in the market for 55+ communities. These builders must take into account the physical needs of older adults when they design for them. Still others know that for some aging adults, owning their own homes as they get older may eventually become a financial burden. They're designing multi-generational floor plans for their families that provide two separate master suites and multi-functional living areas as well as elements of universal design.

For existing homes, where local ordinances allow, interest has resurfaced in adding so-called "in-law suites." These can be anything from a tiny house on a foundation, sometimes called a granny pod, to a basement apartment or rooms above the garage. These units go by many names, but the technical term is Accessory Dwelling Unit (ADU) -- a second dwelling, either attached or detached, belonging to the same owner of the property.

According to the Harvard study, by 2020 one fifth of the U.S. population will be at least 65 years old, many of whom, the study reports, are already living alone and struggling to make ends meet. If you or your parents are among them, it may be comforting to know you could soon have a safe place you can all call home, together again.