Ranking the States: Which is greenest?

Some states are definitely greener than others. Greenopia's 2010 list of the best and worst states for energy efficiency put Vermont, New York, Washington, Oregon and Minnesota in the top five. The worst? That dubious crown goes to Kentucky, Wyoming, Indiana, Louisiana and West Virginia.

But ranking states can be tricky. One state might be a bastion of water conservation yet lacking in green building techniques. Another state could offer the best tax incentives for homeowners who want to go green but fall short on policies that attack environmental problems at the local level.

These states are the friendliest when it comes to tax incentives for homeowners going green, the political punch to ensure change on the state and local levels, and Leadership in Energy and Environmental Design (LEED) certification of public buildings.

Where LEED certification is king

LEED was developed in 2000. Since then, millions of properties have been LEED certified. In 2011, Washington D.C. led the pack with a whopping 31.50 square feet of LEED-certified space per person -- a testament to how government buildings are becoming energy-efficiency trailblazers.

But what about the states? Here's how the best of the best measure up in LEED square feet per capita, according to the U.S. Green Building Council.

There are currently over 44,000 commercial spaces participating in LEED. Some of the most notable certifications in 2011 included the Wrigley Building in Chicago, Terminal 2 at the San Francisco International Airport, the Frito-Lay Building in Lynchburg, VA and the Treasury Building in Washington, D.C. -- which also holds the distinction of being the oldest LEED-certified project in the world.

Red states or blue states: Which are green?

Traditionally, blue political states have focused more on energy-efficient improvement incentives and credits than red states; however, that is changing as politicians see the value in going green.

If a map of the red and blue states from the 2008 Presidential election is superimposed on a map of the most energy efficient states from that same time period, the similarities are striking. States on the west coast, the northeast and the Great Lakes region share both blue voting trends and the highest rates in energy efficiency. The only notable difference is the Southwest, where red states such as Utah and Arizona are decidedly green. 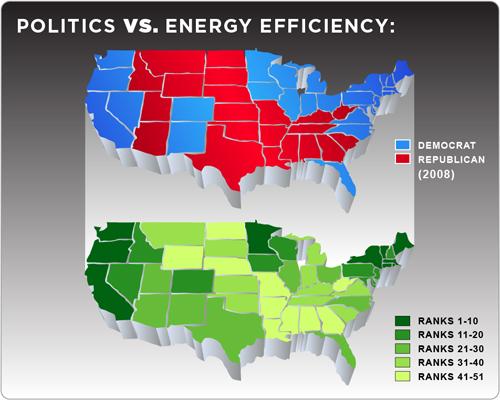 "Obviously, a big part of how states act and react has to do with classic red-blue philosophical differences of how active government should be," said Jason Holstine, owner of Amicus Green Building Center, a green home improvement store headquartered in Kensington, Maryland.

"The redder states take a more hands off approach, the blue states say, 'Listen, there's a problem -- and/or opportunity; the market isn't moving sufficiently to solve it, so we need to.' Some (especially redder) states may support green activities more passively -- this may typically be more at the local level than the state level, where the state simply doesn't get in the way of local jurisdictions that want to do something. These actions can get overlooked," Holstine said.

What about financial incentives?

Several states have jumped on the energy-efficient train with tax incentives and credits for homeowners who want to make their homes more green. Currently, 15 states offer financial incentives for green building on the state and local levels, according to the DSIRE (Database of State Incentives for Renewables and Efficiency) website. Among those, California leads the way with local incentives in San Diego, San Francisco and San Bernardino County.

Eight states currently offer property tax incentives for those who go green, with Maryland at the top of the list. Other states offering financial incentives on property tax include Montana, Nevada, New York, Ohio, Texas and Virginia. Wonder how your state ranks? Review the DSIRE information at the U.S. Department of Energy website.

Local communities might go above and beyond what their state offers. "There are notable actions locally," Holstine said. For instance, "Montgomery County, Maryland has a property tax credit for solar power which has a five-year waiting list."

Where does your state rank?

Now that it's clear who carries the green flag in terms of LEED certification, tax incentives and even political might, what can you do to make sure your state measures up? Get involved! Speak with your political leaders, pay attention to the latest green incentives and "walk the talk" by taking advantage of every opportunity to save money while making your home more energy-efficient. Whether you are changing all those old incandescent light bulbs to energy-efficient CFLs or building a new home to the highest green standards, every little bit goes a long, long way.

Shannon Lee has written professionally for two decades on a wide variety of topics, including medical and health issues, home repair, education and relationships.