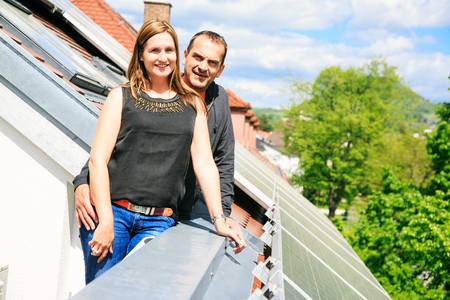 Advances in homebuilding technology have made new construction homes more efficient than ever. Even older homes can benefit from being retrofitted with the latest systems and technologies. Lance Manlove, Certified Green Homebuilder and Division Manager at Schell Brothers in Delaware says, "The whole concept of high performance in homebuilding revolves around buttoning a house up to make it super tight, and then using engineered mechanisms to control the amount of air that comes in and out of it."

Advanced framing techniques, or engineered framing, minimizes the amount of wood, while maximizing the amount of insulation in a wall. Because, according to Manlove, a typical 2' x 6' wall has an R-value of around R-19 to R-20, while a wooden stud itself has an R-value of around R-5 1/2. If you engineer walls so the studs are 24 inches on center (instead of the typical 16) you allow for more insulation and less wood in the wall cavity, and thus greater energy-efficiency. Line those studs up directly under the 24 inch spans of the roof trusses, and the load transfers immediately down. Your structure is just as sound, using less energy-inefficient wood.

Generally performed by insulation contractors, air sealing attempts to make a house as air tight as possible. From the exterior walls, to around outlets and lighting cans, every nook and cranny gets filled. Manlove says, "You want to minimize the amount of air infiltration into the house." Because those nooks and crannies allow air to both penetrate and escape the structure, and allow in moisture and contaminants. Air sealing is verified by an air flow pressure test, which indicates how tight a house is, holistically.

While a wall has an R-value of R-20, a good window has an R-value around R-3 or R-4, says Manlove. He predicts that windows may get more efficient in the next 5 - 10 years, because "a double hung, argon-filled glass window just isn't cutting it anymore in terms of high performance." It's the next big frontier. Europe is already making R-15 windows. "If we can get windows to be that efficient here in the U.S.," he says, "we could reduce the loads on [heating, ventilation and air conditioning] HVAC systems by half."

Speaking of windows, they matter when it comes to HVAC. HVAC systems are, in large part, sized based on a home's windows. The more efficient the windows, the smaller the HVAC system required. The latest trend is dual fuel systems. A dual fuel HVAC utilizes both electric and gas, using each fuel when it's most economical, based on the weather. In milder temperatures, the electric heat pump provides heat, because it's a cheaper source of energy. When the temperature drops below 40 degrees, gas is more efficient, and more comfortable. A dual fuel system with a variable speed fan is even higher performance. Less fan force is required to warm a house when it's 60 degrees out, than when it's 20 degrees. So, a lower fan speed does the job until temps drop lower. In the meantime, you're saving money.

Solar technology has gotten so much cheaper, more Americans are choosing it to power their homes. However, cautions Manlove, you shouldn't go spending lots of money on a solar system before tightening up your house. "The most cost-effective way to reduce your energy bill," he says, "is to tighten up your house and air seal it. Do the sealing, the high-efficiency windows, and upgrade insulation first. Then, you can resize your HVAC, and figure out how much solar you need to offset your energy bills."

As always, return on investment with any of these technologies depends on individual circumstances. So, talk to your contractor about the potential advantages of integrating certain high-efficiency system into your home. It is clear that by implementing technological improvements, we have the opportunity to live more energy-efficiently than ever before.

A confessed DIY junkie, Jennifer writes about home improvement, gardening, upcycling, and all things do-it-yourself. She lives in Delaware with her husband and daughters, where she is ardently teaching the next generation how to use power tools.