For rent: The American Dream

The American Dream used to refer to working until you could afford a house, getting a mortgage to buy that house, and then living happily ever after. We still dream of that happy ending, but more people are opting for home rental over home ownership.

The burst housing bubble and ensuing economic struggles have changed the way we look at the future. While home ownership ranks high on our wish list, home rental has often proven to be more practical. Americans are still on the move, but of those surveyed by the Demand Institute in May 2012, more than half plan to rent rather than buy. 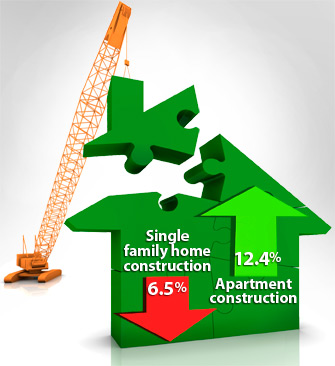 The rise of renting

The Demand Institute's optimistic report, The Shifting Nature of U.S Housing Demand, credits the rental market with putting the brakes on the ongoing downward slide in real estate. Slowly but surely, rental demand is helping to absorb the surplus of vacant properties, which reached approximately 14 percent of all existing units in 2011.

Who is contributing to the growing demand for rental properties? A broad demographic range includes newlyweds, seniors from the baby-boomer generation, and the people who were hit hardest by the recession:

More and more Americans see the practicality -- or the necessity -- of renting. For example, those young couples once led the list of first-time buyers, but they are now deferring home ownership and seeking comfortable rental properties in which to start their families. As you can see from the chart below, more people are living in rental units today than they were seven years ago. 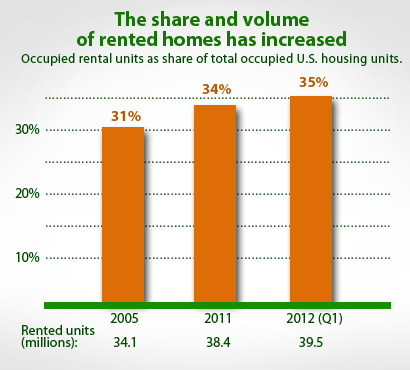 Source: The Demand Institute and the U.S. Census Bureau Housing Vacancy Survey.
*U.S. 2005 and 2011 are annual figures except for vacancy rates which are first quarter of each year. Figures for 2012 are first quarter.

Of course, the desire for home ownership, severely wounded during the economic downturn, has not died. In general, today's buyers search for smaller homes in active communities, near the facilities and services that make life easier. These cautious buyers, along with the growing number of renters, are bolstering the economy.

The Demand Institute sees some improvement in consumer confidence and sales of existing homes, predicting that consumers will opt for less elaborate houses because of financial limitations and the nervous reluctance created by the crash and recession. An August 2012 Wall Street Journal blog post describes the move toward home rental as a lifestyle change that is likely to last for a few more years, as buyers face tighter, and fewer financing options.

Rentals to the rescue

Business sectors that can take advantage of this new housing market, such as home improvement and financial services, could help lead the economy back to stability, says the Demand Institute. The home improvement industry can reap benefits from the movement toward renting. As owners are forced to compete in what has become a "renters' market," many are refurbishing rental units.

The economy is also getting a boost as investors purchase real estate to position as rental properties. The Wall Street Journal blog post, Housing Better, Still Not Normal, describes the infusion of investment money as a shot in the arm for the still recuperating health of the housing market: Foreclosures and short sales priced with deep discounts made up 24 percent of July sales -- a high percentage, but less than the year before.

Investors and developers have turned to constructing multifamily houses specifically for rental. A significant recovery has occurred in 22 out of the 25 markets that led the country in multifamily building during the ten years prior to the housing bust, as shown in The State of the Nation's Housing 2012, a Harvard University study. Cities such as Dallas, Houston, Los Angeles, New York and Washington, D.C. are issuing thousands of construction permits for multifamily housing. However, cities that were hard hit by the housing crisis -- Atlanta, Miami, Phoenix and Las Vegas among them -- have not yet felt this upsurge in construction.

Rebuilding from the rubble

The real estate market has a long way to climb: From 2006 to 2011, the drop in national housing prices exceeded 30 percent, taking an estimated $7 trillion bite out of the economy, according to the Demand Institute. The Christian Science Monitor warns that new home sales fell 8.4 percent in June 2012 and are still far below the number that would signal a healthy market.

The Demand Institute expects a substantial housing market resurgence -- depending on the region. However, this recovery would differ from those we've seen before, with rental housing leading the way.

More optimism comes from the National Association of Home Builders or NAHB. Builders are finding the current flow of sales prospects better than any time in the past five years, says Barry Rutenberg, NAHB chairman, in the 2012 article Builder Confidence Continues To Improve in August.

"While there is still much room for improvement," Rutenberg states, "we have come a long way from the depths of the recession and the outlook appears to be brightening."