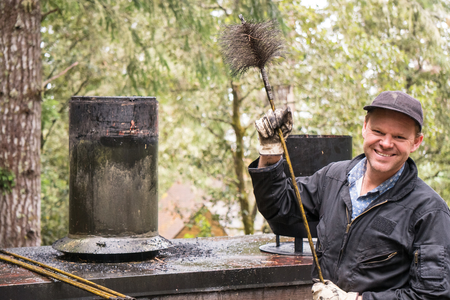 If you heat your home by burning wood in the cold weather or simply enjoy gathering round the hearth to watch a crackling fire, now is the time to service your chimney.

Jack and his brother Joe, Ye Olde Chimney Sweeps in Brooksville, Fla., have been cleaning chimneys for 30 years. They used to delight their original clients by showing up to work in top hat and tails. But talking to Jack, the self-described technician of the two brothers, soon dispels images of Mary Poppins' sooty pal cheerily dancing to the tune of Chim-Chim Cheree.

Why hire a chimney sweep to clean your chimney?

When they first set up shop, Ye Olde Chimney Sweeps learned their trade hands-on, starting out by buying a chimney cleaning kit. As their expertise and clientele grew, they dropped the costumes. Keeping chimneys free from soot is serious business, and the service they and other chimney sweeps provide is one that homeowners should not attempt themselves. Why not?

How often should you have your chimney inspected and cleaned?

The consensus is to have a professional inspection annually.

Ye Olde Chimney Sweeps suggest that clients have their chimneys inspected at least once a year, but Jack says that how often you need to have it cleaned "depends on use". If you burn two face cords of wood each year, get an annual inspection. If you use a Franklin stove, inspect more often. "They burn dirtier." To reduce creosote deposits, he says, "Burn hardwoods. They burn hotter. Pine is gooey, and the soot will be sticky. Grocery store logs are okay, or [burned] in conjunction with hardwoods."

The Chimney Safety Institute of America (CSIA), which offers training and certification and continuing education for chimney sweeps recommends that you have your chimney and venting system inspected each year.

Terry Dearborn of Valley Chimney Sweep and Restoration in the Chicago area has been a CSIA-certified chimney sweep continually for 30 years. He cites the National Fire Protection Code 211 as the ultimate authority, which "requires an annual inspection of all chimney systems."

Chimney cleaning is not limited to fireplaces and wood-burning stoves.

Dearborn recommends, "Gas and oil flues should also be checked on an annual basis for any soot deposits or debris blockage, which could lead to dangerous carbon monoxide poisoning." Gas logs also generate soot and leave deposits in the flue. A professional sweep can clear the chimney of these hazards, as well.

When and why does a chimney need repair?

A cracked chimney can lead to toxic fumes seeping into the house or chimney collapse.

According to Dearborn, even a loose brick on a chimney is cause for concern. It can indicate more serious damage to the chimney, making it unsafe to use. "In all cases," he says, a missing brick "should be checked by a professional immediately to avert the dangers of fire hazard or structural failure."

To prevent damage to the bricks and mortar, Dearborn recommends waterproofing the exterior of the chimney. "Brick is porous, he says. "Heavy rains and melting ice fill pores and expand when temperatures drop," leading to brick and mortar failure.

The flue liner, which protects the house from the intense heat in the chimney, must be replaced if it's cracked. Even a small crack in the liner can be a serious fire hazard. Dearborn recommends metal chimney liners because they can be customized to fit your chimney's specifications, but clay tile liners are another option.

Whether you are venting a fireplace, wood stove, gas or oil furnace, it's important to be aware of the fire and carbon monoxide hazards of ignoring your chimney's condition. As winter approaches, contact a professional chimney sweep for an inspection and cleaning.