Baby boomers Warren and Laureen Blum bought their three-bedroom retirement home in Reno, Nevada, two years ago. They finished a complete downstairs flooring and kitchen remodel recently, and they have a few additional remodel projects they plan to do throughout this year before Laureen can retire to join Warren at home.

Window treatments for the great room and second story clerestory windows 20 feet above it weren't top of their remodeling wish list, but when spring came, the sun was so bright in the afternoons that Warren couldn't see a thing on their flat screen TV. Laureen loved the light that bathed their living and entertaining area from those big, second story picture windows - except during the afternoons. "Every day," she said, "...that sun would just hit me…and force me out."

Without shades, the sun coming through the lower level windows was pretty bright, even in winter.

The afternoon rays from those high windows were so intense, Warren said, the thermostat on the wall opposite registered 90 degrees F. around 3:00 p.m. causing their AC to run full tilt during the hottest part of the day. Summer was still weeks away, so they knew they'd have to do something. They got creative. Window treatments were something they thought they could put off a little longer. They had their contractor install tinted film over the windows. But they soon realized their "bright idea" was no match for the white-hot Nevada sun.

Window treatment options: how they decided on the best solution

The Blums decided to shop for window treatments at their favorite local Home Depot because as Warren said, "They treated us right," referring to when they bought materials for their last remodel there. Home Depot set them up with Hunter Douglas certified design specialist Kaitlyn Agajanian for a complimentary, in-home consultation. (Home Depot sends a professional to properly measure all the windows and to install the finished window coverings so they fit and operate correctly.)

Laureen and Warren quickly narrowed the field of Hunter Douglas options to choose between the Duette Architella honeycomb shades that offer exceptional insulation and their line of Designer Roller Shades. They were partial to a cayenne red fabric from the cellular shade line, but found a brown color in the roller shades that also went well with their Tuscan color scheme. Their decision came down to price and how many features they actually needed for the windows.

"Laureen loves the light her home offers and plans to leave the covering up the majority of the time," Agajanian said. "It was important the product not take up too much room when not in use." 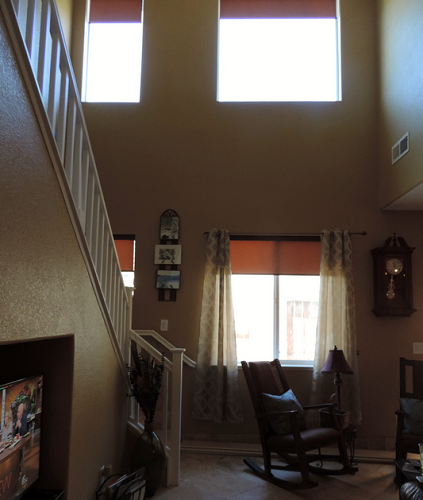 Because two of the four windows on that wall were physically out of reach, Agajanian suggested the Hunter Douglas PowerRise® motorized lifting system with remote control operation. While Warren is not yet a fan of smart home technology, Hunter Douglas also offers the Platinum™ App with their window treatment options for those who want to operate them from a mobile device individually, by room or throughout the entire house all at once.

"Ultimately, they opted for the less expensive roller because the energy efficiency Duette boasts were not their primary focus. For $1,890 they got four Hunter Douglas Designer Roller Shades, two of which were motorized, purchased from and installed by their local Home Depot," said Agajanian. The Duette's would have cost $600 more. The roller shades block the sun and protect them and their home furnishings from UV rays. 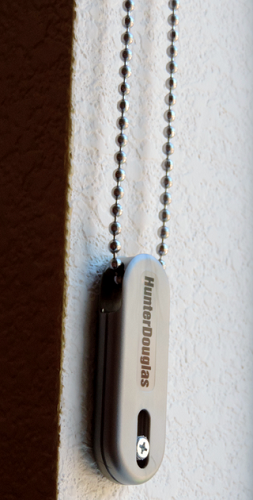 Because the lower window treatments could be manually operated, they saved money by choosing a continuous loop lift system. The beaded cord loop is secured to the interior window frame so they don't have to worry about their cats getting caught in cords - or trying to eat them. The two upper window coverings raise and lower in unison with the touch of a single button from a remote controller mounted on the wall next to the thermostat. They can also be operated independently of each other.

The Blums also saved by taking advantage of Home Depot's regular 15-40% off the manufacturer's suggested retail price and once-a-month special pricing, which together saved them 31% off the MRSP.

"We can use the savings towards other home improvements," Laureen said. That's a good thing. Next up, they plan to do a master bedroom and bathroom remodel, as well as a guest bedroom makeover.