Gutting and greening a worn-out kitchen

"I wanted an open concept living area that was the center of activity and hospitality," Whiton said. "I wanted to conserve natural resources while giving an old home new life. Reducing the [number of] bedrooms from three to two allowed more room in the living areas, especially the kitchen. And for the kitchen, I wanted contemporary lines warmed by funky accents."

As the drywall came down, Whiton noticed how straight and knot-free the existing studs were compared to new ones. That got some wheels turning; could they be saved? Reused? Was an eco-friendly, green kitchen actually in her budget?

Curious what could be saved, she asked friends to help pull nails from a big stack of carefully removed studs. It saved a whole lot more than she expected. Not only trees but also 40% of Whiton's budget for studs. Inspired, Whiton searched reclaimed lumber companies. She found large, handsome, rough-grained beams from an old train depot. These now bear the ceiling loads of Whiton's new greatroom. She went on to replace most of the south wall with roof-to-ceiling insulated windows, which expanded the greatroom visually and flooded it with light, another green choice that saves on electric lighting during the day. 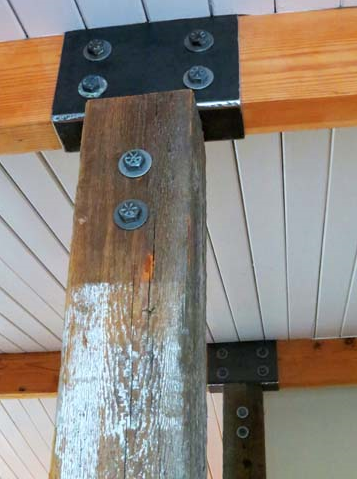 The depot beams provide a natural look that prompted Whiton to avoid clichés in thinking about countertops and cabinets. Having used exposed concrete in her previous home, she designed a concrete breakfast bar and lower cabinet surround to create the sculptural look she loved. Finishing the concrete with an aged look ties it visually with the whitewashed, weathered depot columns. The concrete is made from naturally abundant materials which contribute to a clean indoor environment. Having raised a son with multiple allergies, low-VOC products are paramount to Whiton, and this one is a big winner. The cast-in-place bar cost around $3,000, including the load supports under the floor joists. 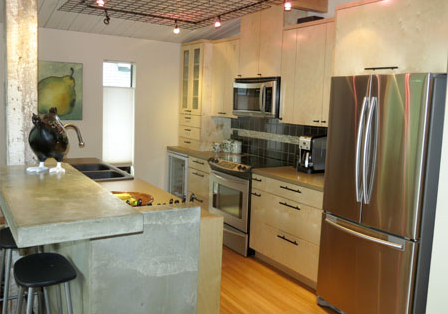 Wanting the breakfast bar to take center stage, Whiton selected top-quality laminate countertops that resemble a coarse sandbed under dappled water. "And I don't have to live in fear of staining it," she adds. Low-VOC adhesive and plywood were used for the laminate counter's construction. 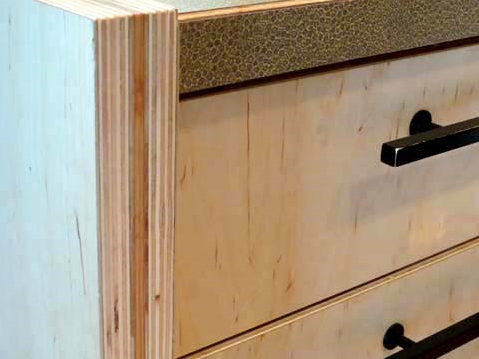 Next came the cabinets, for which she wanted a clean, unpretentious look. "My cabinet contractor at Smith & Vallee, Inc., used furniture-grade plywood from sustainably-certified forests," Whiton said. "Leaving the plywood edges exposed on doors and drawer fronts saves wood and costs." By the food prep area, a slot between two pieces of plywood creates storage for cooking knives. A handy slide-out pantry conserves space. Backsplashes are environmentally-friendly ceramic and glass tiles. Custom cabinets for kitchen, master bath, and a laundry-storage-powder room cost about $11,000, and the kitchen was about 75% of that cost.

Energy Star appliances were a no-brainer at that point. Whiton bought all major appliances at a "scratch and dent" store, where new appliances with minor cosmetic flaws are sold at appreciable discounts. Having previously owned a water-saving two-drawer dishwasher, she knew that it works well for a small family. The second drawer is used mostly when entertaining. 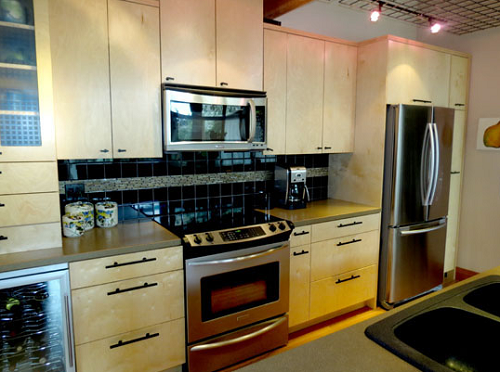 Whiton hoped that Skagit Valley's best floor-refinisher could save the home's original wood floors. Unfortunately, he said that no amount of refinishing could remove the pet stains and odors from the gutted house. Wanting warm tones to contrast with the cool grays of the concrete bar and massive beams, bamboo was the natural choice both for style and sustainability. The flooring has a scratch-resistant low-VOC coating to boot.

A whimsical touch of repurposing is the suspended wire fence section over the kitchen that supports colorful track lights. "But the concrete bar is my favorite element," Whiton admits. "It feels like an abstract work of art to me, and its mass gives a substantial feeling to what is a small home. It anchors the greatroom visually. Love it!" 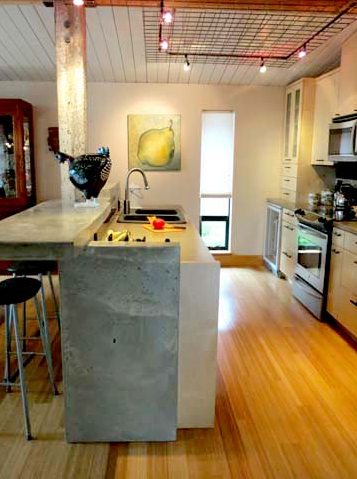