How I met my contractor, part 2

Last March we made an offer on this old farmhouse in Stuyvesant, NY. 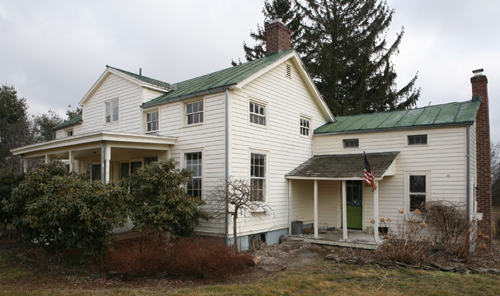 It was 200 or so years old and had a few... issues. Back when we were interested in our first house, almost a year earlier, we paid a contractor (a friend of a friend) to check out the house and provide us with a ballpark figure on rehab costs so we could make an informed offer. By the time we made an offer on the house above, our third house, we'd dispensed with the pre-offer contractor assessment. We'd seen enough houses and done enough research by then that we felt confident in naming a price. Our offer was accepted; then we hired a home inspector and started asking around for contractor recommendations (the contractor we'd worked with previously was building a house in the British Virgin Islands by that time).

Enter Joe Rapp. Our realtor said that Rapp Construction Management, based in Hudson New York, had a stellar reputation. Joe met us at the farmhouse during the home inspection. After about an hour or so he and our home inspector gave us pretty much the same advice: "Run in the opposite direction." We knew the house had foundation problems, but it also had carpenter ants, rot, a terrible roof, etc. I looked over the 7+acres, the swimming hole, the view of the Catskills and the big red barn and tried not to cry. Our budget for rehabbing was around 100K, Joe said it would easily cost three times that much. We thanked Joe and our inspector, and said we'd keep in touch.

A month later we invited both of them to the house we eventually bought, and once it passed inspection we asked Joe to give us an estimate on an addition that included two bedrooms and a bathroom. Meanwhile, we asked friends for other contractor recommendations and began meeting them and calling their references. We liked one other contractor a lot. But in the end, we liked Joe even more.

Joe provided a list of references, and we called all of them. One of the references invited my husband to come see Joe's work first hand, which he did (while I stayed in Brooklyn with our girls), the other two sent photos of the completed work. Everyone spoke highly of Joe and thought he did excellent work.

Joe (in glasses) and my husband finalizing details. The wall behind Joe will be knocked down in the next few weeks. The sliding glass door will be reused in the master bedroom.

I recently read Steve Job's biography, and one of the things that stuck with me was his belief in the power of intuition. Jobs dabbled in Buddhism throughout his life and spent time in India after dropping out of college.  “The people in the Indian countryside don’t use their intellect like we do,” he said. “They use their intuition instead ... Intuition is a very powerful thing, more powerful than intellect, in my opinion.”

Over the course of several months, a dozen meetings and easily 50+ emails, we've learned the following things about Joe. Some of these influenced our decision to hire him, and others just made us happier with our decision.

These photos were taken a week ago. Next up, framing out the walls of the addition, and tearing down the eastern facing walls (above). We'll be back upstate this weekend; meanwhile, I'll be writing about our bathroom renovation and sharing photos of our current home here in Brooklyn.